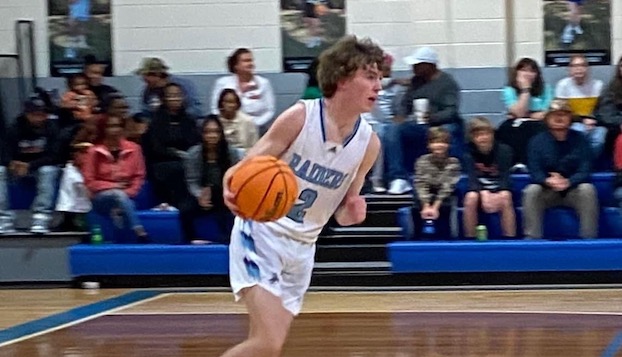 Pungo Christian Academy wrapped up its 2022 schedule with games at Community Christian and home against Ocracoke School.

Tuesday, the Raiders traveled to Wilson to take on the Cyclones. The girls rolled to a 57 – 19 victory. Reagan Stoop had 15 points and 20 rebounds to lead the Lady Raiders. Alden Taylor continued her recent impressive play with 10 points, while Ginny Pugh scored eight and had five assists.

The boys got off to a fast start, building a 20 point lead midway through the third quarter. The Cyclones were able to capitalize on several Raiders in foul trouble and trimmed the lead to five with just over six minutes to play. Pungo answered with a 7 – 0 run to seal a 66-54 victor. Maddox Lee led all scorers with 20 points and seven steals. Davis Lee (12), Austin Garrish (11), Drew Van Staalduinen (11) and Quay Artis (10) also scored in double figures for the Raiders. Van Staalduinen (14) and Garrish (10) led the Raiders in rebounds and each had a double-double.

On Thursday, PCA hosted the Dolphins of Ocracoke School in their last game before Christmas break. The girls styed undefeated at 12-0 with a 67 – 24 victory. Stoop had 24 points and 18 rebounds. Abbey Cutler added 12 points and Taylor added eight.

The boys jumped out to a 14 – 6 first quarter lead and never looked back on their way to a 76 – 51 victory. Artis led the way with 24 points, 5 assists and 5 steals. Maddox Lee (17), Garrish (14) and Evan Woolard (10) all scored in double figures. Van Staalduinen hit double figures in rebounds with 10. The Raiders are now 10 – 2 and winners of 6 straight. “I’m very proud of how we have played the last two weeks” head coach Logan Van Staalduinen said. “We have faced some really tough teams that will help prepare us for our conference schedule. I’m proud of our team for working together to get some big wins and we’re excited to get back to it after Christmas.”

The girls are ranked second in the latest NCISAA 1A MaxPreps poll behind Victory Christian of Charlotte, while the boys are ranked fifth. Stoop leads the Lady Raiders with 22 points and 14 rebounds a game, while Maddox Lee leads the boys.

Both teams are going to have a good chance at competing for a TIC championship in February. The girls are looking to win their third straight and fourth in the last five years while the boys are hoping to take home the TIC crown for the first time since 2013.