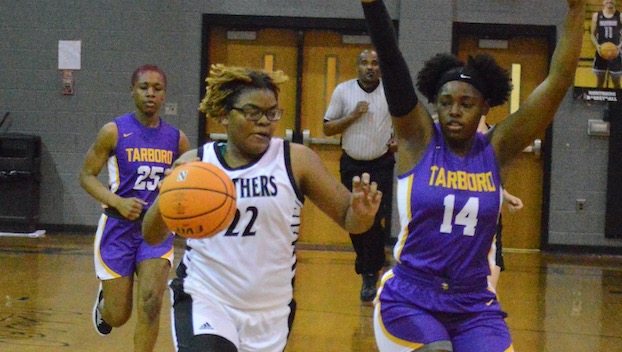 The Washington High School boys basketball team has won its first two Eastern Plains 2A Conference games, while the 1A portion of the Coastal Plains Conference race looks like a pair of rivalry games will decide it.

The Washington boys are 4-4 overall 2-0 in the Eastern Plains 2A conference after a 73-69 overtime victory at Ayden-Grifton Wednesday.

Sophomore reserve guard Khaliq Boston hit back-to-back three pointers during the extra session to help the Pack come all the way back after trailing by eight points at halftime.

“We were timid in the first half and weren’t attacking, but we adjusted in the second half,” coach David Allewalt said. “Khaliq and Oliver Thomas gave us a lift off the bench and we played with a greater sense of urgency.”

6’5 junior Gary Payne was out with the flu, but Allewalt said guards Jayvon Williams, Chaise Smith and Jerai Davenport shot the ball well from the perimeter.

“Those three usually combine for around 50 points a game and they hit their mark again,” Allewalt said. “We’ve won three out of our last four against the fourth toughest schedule of any 2A team with only two home games. We’re in the Goldsboro tournament next week and will face more tough competition, which will prepare us for our next two conference games at Farmville Central and home vs. Greene Central after the break. It also keeps a ball in our hands during the break and it will help our guys stay in shape.”

Meanwhile the Northside boys are 4-7 after six straight losses and Southside is 2-7.

The Panthers and Seahawks girls are headed in the opposite direction. Northside claimed a win at Croatan Wednesday to finish the 2202 part of the schedule with a 9-1, 1-0 record.

Junior Mariah (Mimi) Jones and sophomore Olivia Jane (OJ) Cahoon lead the team in scoring, but the key to the hot start is other players making strong contributions as well according to coach Michelle Leathers.

“Mimi and OJ are our first two options no doubt, but the others have stepped up their game,” Leathers said. “Tatianna Moore, Maddie Gibbs, Kenan Woolard and Donjayne McCloud have done a great job off the bench.”

Leathers said the almost perfect start to the season started to take shape during the summer when the team took part in a series of scrimmages at Perquimans High School.

“We played a lot of really good teams from around the East and it gave our girls a chance to work together as a team,” Leathers said. “This is a hard-working group. I was looking forward to a little holiday break, but they want to practice next week to stay ready for the rest of the season. I can’t say no to that.”

The Washington girls are 0-7. Senior Haley Whitley and junior Triniti Burke are the scoring leaders at 6.8 per game and top two rebounders with six per contest