Raiders get back to the hardwood next week 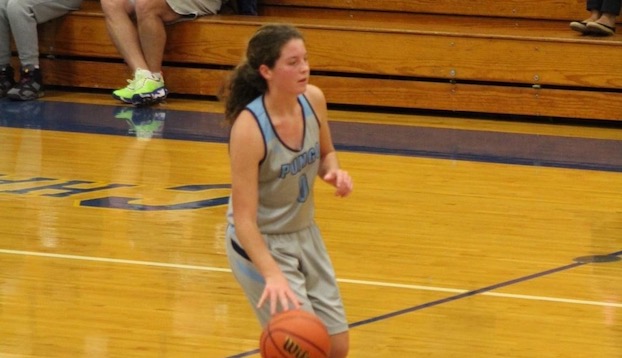 Ginny Pugh is the Lady Raiders second-leading scorer and is fourth in the state in assists per game. (submitted)

Pungo Christian Academy’s basketball teams are gearing up for the conference slate as play resumes next week.

The girls are 12 – 0 and 1 – 0 in conference after beating Albemarle School earlier this season. Senior Reagan Stoop has been a big reason why, leading her team in almost every statistical category. According to MaxPreps, Stoop is 16th in the country in double doubles (12) and leads the state of North Carolina in field goals made with 109. Stoop is averaging 22.5 points and 14 rebounds a game.

Abbey Cutler is second in the NCISAA 1A for assists per game (3.6) while her backcourt mate, Ginny Pugh, is fourth (3.0). The Lady Raiders will have a tough test when they get back from the break as they host John Paul II January 3.

The Tarheel Independent Conference currently has five schools ranked in the top 10 of the latest MaxPreps NCISAA 1A Girls poll. PCA will also host fourth-ranked Crossroads Christian of Wilson at the end of January, which gives the Raiders nine games against NCISAA 1A top 10 opponents out of their remaining 12.

The boys are 10 – 2 and 1 – 0 in conference with a win over Albemarle School back in November. Junior Maddox Lee leads the Raiders in scoring at just over 18 points a game. Lee is one of four players averaging double figures with Quay Artis, Austin Garrish and Drew Van Staalduinen all averaging around 12 per game.

Van Staalduinen (10) and Garrish (eight) lead the team in rebounds while Artis leads the team in assist and steals with six and four per game.

The Raiders have been without sixth man Bo Spencer the last two weeks due to a forearm injury but he is scheduled to returns after the break.

PCA will get a chance to avenge their two losses in the first two weeks of the new year when they host John Paul II and Lawrence Academy. The Raiders are one of three conference teams ranked in the top 10 of the latest MaxPreps NCISAA 1A poll with Ridgecroft third, Pungo fifth and Lawrence sixth.

The Raiders will host fourth-ranked Crossroads Christian at the end of January, giving them five games against top 10 1A opponents out of their remaining 13 games.

With just five weeks left in the regular season, the Raiders hope to carry their hot start over to the new year.