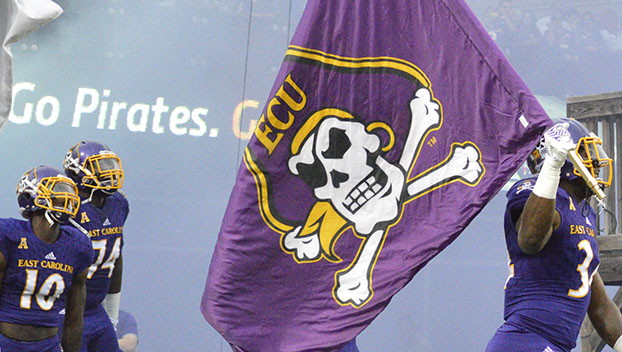 ECU fifth-year quarterback Holton Ahlers accounted for six touchdowns in the Pirates 53-29 win over Coastal Carolina Tuesday night, wrapping up ECU’s first eight-win season since 2014 with an elusive bowl victory and putting a bow on a prolific college career.

The numbers are dumbfounding. Since arriving on campus from nearby D.H. Conley High in 2018, the cannon-armed southpaw has amassed nearly nine miles of offense in his five-year stint. That’s the equivalent of over 160 trips up and down the full length of the field. Most of that acreage is attributed to Ahlers arm, but he’s never been shy about tucking and running. Those gifts pale however to Ahlers’ drive, a determination that has helped to put ECU football back on the map.

His accumulated superlatives rank him at or near the top in both ECU and American Athletic Conference history in passing yards, touchdowns and total yards. And though not always reflected in the all-important win-loss department, Ahlers heart has been a key component in righting the Pirates’ proverbial ship; which was going down fast when he spurned other offers from larger programs to come aboard.

When then-new head coach Mike Houston took the helm one year later, he hitched his wagon to the rising star signal-caller from the beginning. When the anticipated progress didn’t arrive soon enough, the angry Pirate mob began to question Ahlers’ ability, but Houston wisely stuck to his guns- knowing full well that without the local kid who bled purple and gold, his fortunes would not bode well. Houston and Ahlers were in this together.

After last year’s Covid-related bowl cancellation, Tuesday’s showdown in the TicketSmarter Birmingham Bowl was the crowning achievement in the methodical, if not tortuous Pirate rebuild. On the night, Ahlers connected on 26 of 38 passes for a cool 300 yards, ran for a TD, and nearly had a touchdown reception to boot. Ahlers chunked the pigskin around the field like an old pro, making hamburger out of Coastal’s porous defense and shredding the cold Astro-Turf in Birmingham seemingly at will.

While the limelight was on the senior QB, Ahlers got plenty of help. Georgia transfer Jaylen Johnson had a big night for the receiving corps, while sophomore phenom running back Keaton Mitchell scooted for another hundred plus yard game. The attacking Pirate defense grabbed five sacks and two fumble recoveries. The only blemishes on the evening for ECU were a blocked punt and an uncustomary rash of penalties.

It didn’t hurt that Coastal Carolina was in shambles. With a head coaching vacancy, transfers, injuries and off the field woes, the Chanticleers still at least appeared game until starting QB Grayson McCall bowed out late in the first half to injury. From there, the Bucs were in command.

Houston and Ahlers will soon part ways, and the road gets tougher for both. Ahlers presumably will try his hand in the NFL. Houston and ECU open the 2023 season at the University of Michigan. Both are daunting tasks, with more twists in the offing that we can see from here. For that one chilly night in Birmingham though, the earth stood still for Ahlers, Houston and the Pirates as they celebrated a notable moment in Pirate football history. The future can wait until tomorrow.

David Singleton is the Group Marketing & Advertising Director for