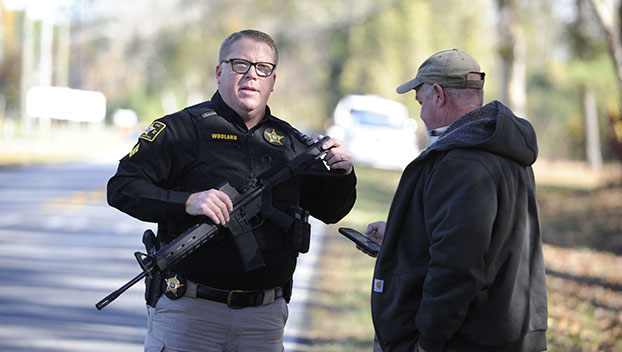 This story was originally published in December 2022. It was one of our most read stories from the year.

All students, staff and others are safe after a chaotic scene at Washington High School this morning, according to a released statement from Beaufort County Schools.

Multiple agencies responded to the school as concerned parents crowded nearby neighborhood streets just outside a law enforcement perimeter.

“Local law enforcement received a report of a possible incident on the campus of Washington High School this morning,” according to a Facebook post by BCS. “No incident has taken place.”

Law enforcement officers from the Beaufort County Sheriff’s Office, North Carolina Highway Patrol and others rushed to the scene, where officers in tactical gear, many holding rifles, could be seen surrounding the school.

Sgt. Kevin Woolard of the Beaufort County Sheriff’s Office spoke to parents on the scene, attempting to “still their hearts.”

“I know you’re concerned. I’m a parent,” Woolard said. “There was an active threat called in. All the law enforcement in this county is rolling right here right now. Buildings are being swept. Nobody has been injured or harmed in any way. Students are safe.”

A group of parents watched nervously from Slatestone Drive. One used binoculars to assess the situation on the nearby campus, while others shared reports from their children after communicating with them through text messages.

One parent said they were careful to text rather than call to prevent an audible ring that might alert a potential active shooter.

“All students, staff, etc. are safe at these locations as well,” according to the post. “No actual incident took place.”

A similar event appeared to occur at at least one other school in Eastern North Carolina on Thursday morning.

The Craven County Sheriff’s Office determined an anonymous phone call regarding an incident at New Bern High School was a hoax, according to local media reports.

Other cases were reported at schools across the state Thursday, prompting a statement from the FBI field office in Charlotte.

“FBI Charlotte is aware of numerous threats to area schools and are in touch with the local law enforcement agencies involved. We urge the public to remain vigilant, and report any and all suspicious activity and/or individuals to law enforcement immediately.”