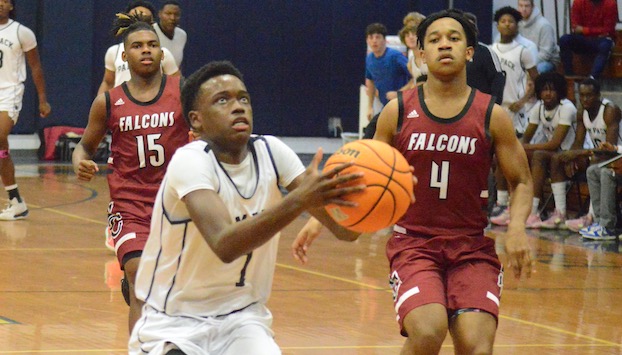 Smith had 19 points, 10 rebounds and 10 assists to lead three players in double figures

“He has adjusted to the pace of high school basketball and is no longer a freshman in my mind,” coach David Allewalt said. “He played a really good floor game, was aggressive on the boards and I see this as a building block for what he’s going to do the rest of the season.”

Smith was named to the All-Tournament team along with sophomore Jayvon Williams.

“We lost to two very good teams in the tournament and face two very good teams next week,” Allewalt said. “We need to keep our composure and take care of the ball against Farmville and the Greene Central game will only be our third home game all year. Our schedule so far has prepared us to face tough opponents every night and next week will be a good test to see how far we’ve come. Our defense is getting better, but we need to get back in the gym for practice to make some adjustments. We are excited to play two very tough opponents next week.”