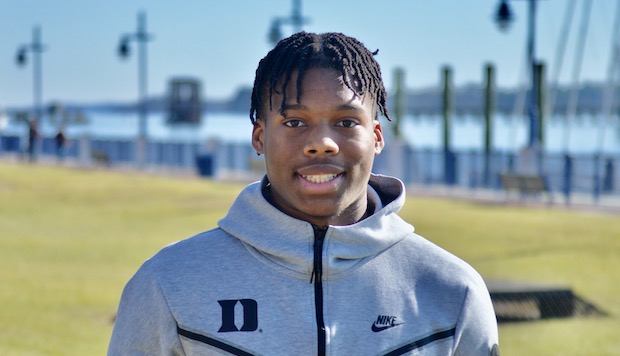 One year ago, Terry Moore was packing his bags to begin his college experience at Duke University while his Washington High School classmates were starting their final semester.

Now, Moore has completed a freshman football season in which the Blue Devils, picked to finish near the bottom of the ACC, won nine games and played in a bowl game for the first time since 2018. First-year head coach Mike Elko was named the ACC Coach of the Year and Moore saw action in eight of the 13 games. He was the Blue Devils fifth-leading rusher with 128 yards on 29 carries. He’s spending the rest of his school break in Washington and had time to answer questions earlier this week.

Terry: it exceeded all my expectations. It was a tremendous experience from the first day of pre-season camp in August until after we walked off the field at the bowl game. It has been an absolutely amazing experience so far.

Terry: Without a doubt. It gave me time to settle in and get comfortable and with the coaching change, it helped me make an impression on them early. By the time camp started in August, I knew the routine and how to handle my academics and life off the field. It was definity the right call.

Terry: Yes, and that’s one of the things I like best about him. He was always very positive and communicated clearly that he was here to win. He didn’t care what happened in the past and he was honest about the hard work it would take to be successful. I think our season went the way it did because of the tone he and the other coaches set from the very first day of spring camp. He told us to tune out the negative predications about our season and focus on getting better every day. The older players bought into it and the younger guys followed. There was a positive vibe every day and it carried over into games.

Terry: I’m 6’1 and right at 200 lbs. I was 192 during the spring, then 197 and now 200 with three percent body fat. I credit our strength and conditioning staff and the nutritionists for helping me. We have an outstanding weight program and facility, so all I really had to do was stick to it. I like lifting weights and it was fun to see improvement.

Terry: We were both undefeated and their stands were packed. The coaches told me earlier that I would see the field, so I was excited. I had been dreaming about playing college football for a long time and it was amazing that my time had finally come. My parents were there, so it was a really cool experience.

Terry: The coaches gave us feedback all the time and they said the thing that got me on the field for games was how hard I worked in practice. The first carry against Virginia showed me I actually belonged on the field, but I didn’t have time to think about it too much. You have to lock in every play so you get to stay on the field.

Terry: It was a very serious preparation week in practice. The older guys were into it and the coaches were more serious than usual. It was really fun playing in the game, but it was very disappointing to lose by such a close margin. It really stunk to have the go-ahead touchdown called back on a penalty. Everybody in the state knows about the rivalry and it was fun to be a part of it.

Terry: The coaches had been prepping me all week to have a bigger role and had installed some plays designed for me. The injury happened on the first play I was in. The ball was supposed to go to the other running back, but the defense switched, so we changed the play. I got tackled normally, but fell weird and my left ankle really hurt. I thought it was a stinger at first, but then I couldn’t get up. That was a setback for a couple of games.

Terry: Yes, but my family came early and we got to hang out on Christmas, A lot of other families came also, so it was nice. Not as good as home, but almost. The bowl experience was really fun. It was neat for the older guys because none of them had played in one before. Getting the win capped a great season.

Terry: I took four classes and got three A’s and a B+, which makes my GPA 3.6. I have to write a lot of papers, so that was the hardest part to get used to. My favorite class was Markets and Management and I will take four classes again this spring.

Terry: I was surprised to see the vacant lot where Bojangles used to be, but I’m glad they are rebuilding it. It was also neat to see that the carwash has opened.