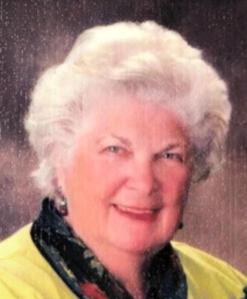 She was born on September 1, 1932, in Washington, NC. She was the only child of the late Bruce and Adele Tankard. She spent her childhood in Washing- ton surrounded by cousins and relatives. Her three first cousins – Frances, Jane and George – lived right next door, the two households were seemingly inseparable. She graduated from Washington High School and attended St. Mary’s College in Raleigh. It was there that she met Hal Brown, who soon became her husband in 1951. They were married more than 70 years.

After Pat and Hal married, Pat spent the next 15 years following Hal from job to job with a war and graduate school mixed in. She also had five children. Andy, their oldest, was born in Boston. They moved to Greenville, SC, where they had two more children, Bruce and Adele, before finally coming to NC where they had Edward and George. They landed in Winston-Salem in July 1966.

Winston-Salem could have never replaced Washington, but Pat made it home as she raised the children, serving as each child’s Class Parent, sometimes to more than one child at the same time. She drove them all to Boy Scouts, Tiny Demon football, cheerleading practice, and Floretta Baylin dance lessons. Although she didn’t mow grass, she claimed she could fix a lawnmower. She may not have been to med school, but she knew just the right touch with both a sick child and one relying on hypochondria to avoid school. In a house full of opinionated and rambunctious children, she walked softly, sometimes carrying a big stick, and never needing it.

Long after all her children were grown, she gave each one a box of everything she’d collect- ed from their childhoods: report cards, SAT scores, photos, and award certificates. Most had no idea she had saved so many personal items. In addition to orchestrating the lives of her children – rarely keeping their names straight when she was frustrated – she was an animal lover. The family had many dogs, including Lady – a standard poodle – and Stash – a mutt lab/retriever. The family also had rabbits, cats and a parrot, Charlie. She treated every one of them as if they were her biological children.

In 1970, when she and Hal started the textile firm Adele Knits, Pat agreed to be a temporary office manager and accountant. That turned into more than 40 years as vice president of the company. Just as she ran her household – a place for everything and everything in its place – she guided the company the same way, both as an administrator and keeping Hal as close to budget as possible.

In addition to being a Hall-of- Fame (first ballot) homemaker, mother and wife, she was involved in charitable causes in the Winston-Salem area. She was president of the Episcopal Church Women, parish treasurer, and vestry member. Pat represented the diocese at the COCU Conference and participated in the St. Paul’s Church School activities. She served on the Ronald McDonald Home board from its founding, and, with her husband, led the Winston-Salem/Forsyth County United Way Campaign.

While she may have moved away from Washington, NC, her heart never did. Before there were cellphones, no one in the Brown household was allowed to talk on the phone for more than three minutes. Except Pat, but only if she was talking with someone in Washington. Which she did often. While she may not have lived there, she stayed on top of local gossip, attended almost every cousin’s child’s wedding, and special events.

While she had a houseful of children and pets, she still made her home a safe place for all her children’s friends, nieces, nephews and cousins, and al- most anyone in need of a calm- ing presence. There was never a dull moment in Sherwood Forest where she lived, and when she and Hal moved downtown, the frenetic pace continued. She continued up until the week of her death as the hostess with the mostest, always available to chat, exchange gossip or reminisce about growing up and the early years in Winston. Even when her health and COVID precluded her from going out of their condo much, she still knew about the new restaurants, construction, and changes going around town.

Pat was predeceased by her son, George, and husband of 70 years Hal, and survived by four children (and their spouses), Andy (Margery), Bruce (Suzy), Adele (David) and Edward (Victoria). She was also predeceased by her daughter-in-law Kathryn Leinbach Brown and all three of her childhood-next-door-neighbor first cousins. She had seven grandchildren, five step-grandchildren and one great-grandchild-to-be.

A service will be held at St. Paul’s Episcopal Church on Monday, January 9, at 11 am.

In lieu of flowers the family hopes that donations will be made to either of Pat’s favorite organizations: St. Paul’s Episcopal Church, 520 Summit St., Winston-Salem, NC 27101 or The Ronald McDonald House Charities Triad Chapter, 419 S. Hawthorne Rd., Winston-Salem, NC 27103 (https://rmhcpt.org/ donate) or to an organization of your choosing in her name. Condolences may be made online at www.salemfh.com.