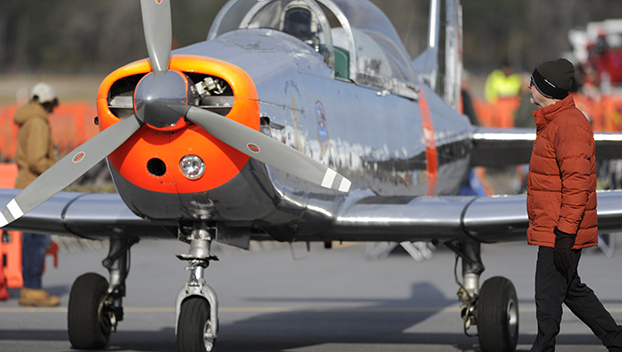 A spectator checks out an airplane on display at Washington-Warren Airport during the KOCW Air & Drone Show, Dec. 17, 2022. (Ashley Vansant / Washington Daily News)

Washington-Warren Airport (KOCW) contributes $25.6 million to the state’s economy each year, according to a report released by the N.C. Department of Transportation’s Division of Aviation.

KOCW’s share is part of more than $72 billion contributed by North Carolina’s 72 publicly owned airports, which support nearly 330,000 jobs and make up 11 percent of the state’s total economic output, according to the NCDOT.

Washington-Warren Airport supports 150 jobs, personal income of $8.5 million and contributes $757,000 in state and local taxes, according to the report.

NCDOT releases the report, “North Carolina: The State of Aviation,” every two years to “help guide future investment in aviation infrastructure and provide a tool for recruiting aviation and aerospace industry companies and investment.”

Passenger service at the state’s commercial airports rebounded in 2021 to nearly 80 percent of the state’s pre-pandemic traffic count in 2019, the study found.

The report touts partnerships with uncrewed aircraft systems (UAS or drones) as an important step in developing a “complex system of infrastructure and regulation.”

“North Carolina, at the forefront of developing such a system since 2014, continues to achieve significant advances in drone use for business and government purposes.”

Among the state’s 17 N.C. Beyond partners is Xelevate, a company that announced this summer its plans to make Washington-Warren Airport the first “drone-smart” airport on the East Coast through integration of its Unmanned Systems Center of Excellence.

State Rep. Keith Kidwell, who helped secure a $20 million allocation from the NC General Assembly to support economic development at the airport, said partnerships like those with Xelevate will help promote economic growth in Beaufort County.

“We’re talking potentially into the hundreds, maybe even a thousand jobs over the next several years,” Kidwell said at the Washington-Warren Aiport’s Air and Drone Show held Dec. 17.

The full report is available online at www.ncdot.gov/aviation.