Raiders spilt in first week back 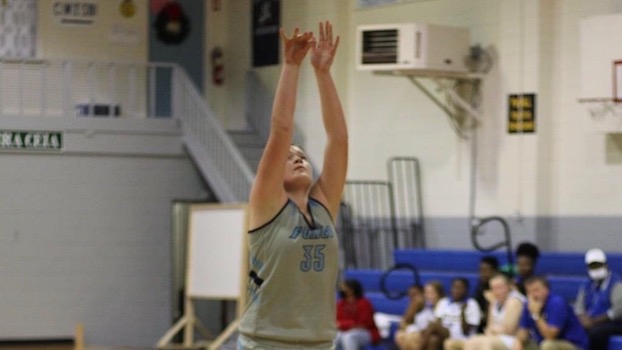 PCA returned to the hardwood last week after a two week Christmas break. The rust was evident for both teams on Tuesday as John Paul II swept the Raiders on their home floor.

John Paul II held an 11 point halftime advantage before the Lady Saints outscored the Raiders 19 – 11 in the third quarter to pull away, 65 – 41. It was the Lady Raiders first defeat this season. Reagan Stoop led the way with 21 points and 10 rebounds, while Abbey Cutler scored nine points, all on three-pointers.

In the boys game, the Raiders got down by as many as 11 points in the third quarter before coming back to take the lead with under a minute to play. The Saints hit a go-ahead three-pointer with under 20 seconds left that proved to be the difference as the Saints prevailed, 51 – 47. Quay Artis had the hot hand with 24 points and was the only Raider in double figures. Drew Van Staalduinen and Austin Garrish each had 10 rebounds. The Raiders shot just 37% from the floor in the loss.

Friday, the Raiders hosted their county and conference rival Terra Ceia Christian School. The Lady Raiders jumped out to a 37 – 13 halftime advantage and never looked back, defeating the Knights 67 – 24. Stoop led the Raiders (13-1, 2-0) with 18 points, while Cutler and Alden Taylor each had 12 points. Sophomore center Allison Sawyer had eight points in her second game back from a knee injury suffered last season.

For the boys, the Raiders were up 42 – 22 at halftime and rolled to a 84 – 38 victory. Maddox Lee led all scorers with 26 points. Quay Artis was the only other Raider in double figures with 17. Garrish added nine points and eight assists while Van Staalduinen also scored nine and grabbed 10 rebounds as PCA raised its record to 11-3 and 2-0 in conference play.

Both teams will travel to Northeast Academy on Wednesday and host Lawrence Academy on Friday this week in what will be a crucial matchup for TIC standings.