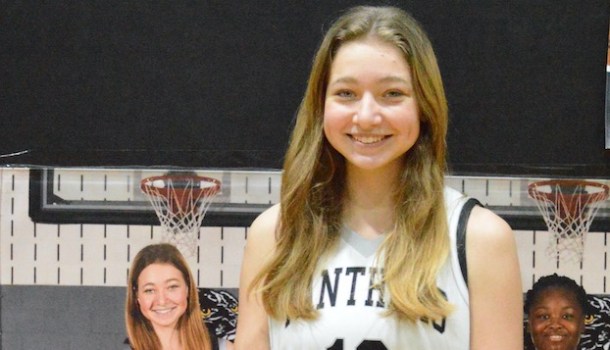 Senior Jean Grace DeHoog has been part of multiple successful volleyball and basketball teams during her four years at Northside and she might join the track team for her final sports season. The Belhaven resident also has several interests off the court and has a clear path after graduation.

Jean Grace: I started playing Upward basketball in elementary school and began volleyball in seventh grade at Northeast Elementary. I enjoy playing both a lot, but probably like basketball better because I’ve been playing it longer. It’s been a lot of fun to play both sports for Coach Leathers here at Northside.

Jean Grace: Several tremendous life lessons including never giving up and not letting people push me around. I’m more physical on the basketball court now and more confident away from sports. She knows how to build and keep a team together without drama. She’s taught us to communicate well as teammates in both sports and to trust each other, so we can make adjustments without getting mad. She knows what’s best for us and the team and chemistry is always really good on her teams.

Jean Grace: My basketball highlights would be going to the East finals twice and beating East Carteret when they ended the game with only two players on the floor. For volleyball, it would be beating Pamlico County to win the conference championship last year. Shyanne Buck and I combined on a block to score the winning point. Blocking in general is a highlight because it’s quite an adrenaline rush. It feels really good to send the ball right back at them and watch it hit the floor to score a point.

Jean Grace: I will attend Pitt Community College to study occupational therapy. My little sister has autism and I’ve enjoyed helping her over the years. I’m open to working with all age groups with disabilities, but my first choice would be to help kids.

Jean Grace: I like to kayak and generally be outside. I also like rock music from the 70’s, 80’s and 90’s and I like to read fantasy novels. My whole family is into Star Wars and Marvel, so my favorite character would be Thor. I love his power and the way Chris Hemsworth played him.

Bonus question: Who would be your guests if you could host a dinner party with any three people, alive or not, and what would you serve?

Jean Grace: Elvis, Taylor Swift and Abraham Lincoln. I would get things started by asking what their lives were like at my age and ask them about their greatest achievements, then sit back and let the conversation flow. I would serve steak, mashed potatoes and fried apples with cinnamon.