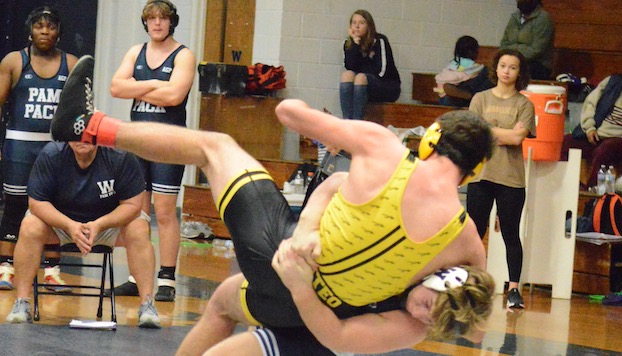 The streak was never in jeopardy. The Washington High School wrestling team continued its nine year conference undefeated run with a 78-6 rout of North Pitt and a non-leauge win over Manteo in Wednesday’s home tri-meet.

Sophomore Gabe Davis provided one of the highlights in his 195 lb. match with Manteo’s Nick Brewster, who had defeated him earlier in the season.

Davis came out aggressively and soon had the match under control. With arm’s wrapped around Brewster’s midsection, Davis hoisted him into the air from the squat position, dropped him to the mat and fell on top for the pin, bringing the students in the crowd to their feet.

“Brewster was a state qualifier last year and Gabe had been thinking about avenging his loss all week, WHS coach Chris Penhollow said. “Gabe is strong as an ox and hard to get off his feet. We’ve worked on being more aggressive and he had the right attitude tonight.”

“Meza is just a freshman and he pinned the defending East champion at 126, which was one of the highlights for us,” Penhollow said. “We had a great crowd, which really pumped up our kids, so it was a good night. Our lineup is shaping up, but we can’t take our foot off the gas.”