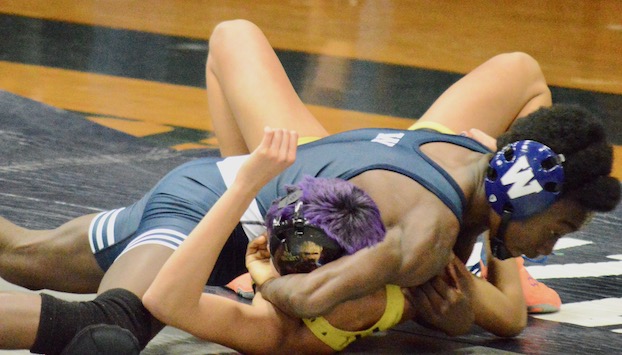 “This is a great kind of routine to get into,” coach Chris Penhollow said. “It’s one of our team goals every year and all our guys showed up and did their job.”

The championship means the Pack will have the top seed in their four-team pod when the state tournament team competition starts January 28.

DaShawn Smith won all four of his contested matches in the 285 lb. class as did Bryant Smith at 152.

“We have good depth throughout our lineup and it showed Saturday,” Penhollow said. “We’ve competed well. In every weight class over the years and that’s the key to winning nine straight.”

The lone blemish of the day came when sophomore Gabe Davis injured his right knee during his 195 lb. match with his Ayden-Grifton opponent. Davis couldn’t continue and Penhollow isn’t sure if he will return for the first state tournament matches.

“I hate it for hm because he had wrestled very well lately,” Penhollow said. “The other guy fell on his knee by accident and Gabe couldn’t continue. We’ll be glad to have him back whenever that is.”