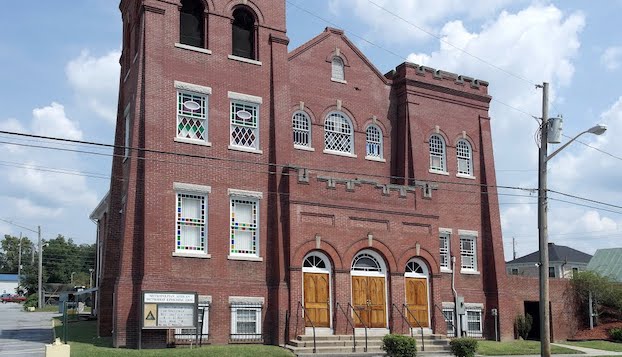 I have had so many requests to do more ‘Know Your Town’ series that feature the history of the African American community that I share on my historic Washington’s African American history Tours. So, I will begin 2023 sharing some of that history.

This building historic building, the Metropolitan African Methodist Episcopal Zion Church, at the corner of Dr. Martin Luther King Jr. Drive and Market Street has an awesome history. An integral part of the Black Community, this church housed a ‘Freedman School’ in 1865 for formerly enslaved people and was later used as a school for Blacks from 1865 to 1915. The church was founded in 1841 and this building was erected in 1909.

This church housed the First African American Library in Beaufort County. Rev. Isaiah Beecher Turner, the church’s pastor, started the Library in a small room of the church in 1940. It rapidly outgrew this space and relocated to the Bruce Payton Building on Gladden Street between Fourth (now known as Dr. Martin Luther King Jr. Drive) and Fifth Street.

In the late 1960’s the library moved from there to a building that was constructed for it at Pierce and Ninth Street known as the I. B. Turner Library.

In 1910, the pastor of the church, Rev. John Love, was instrumental in helping to bring Dr. Booker T. Washington to Washington NC. He sold tickets for Dr. Washington’s speaking engagement at Brown’s Opera House which was located at the corner of Main and Market Street.

In 1916, the Worshipful Grand Lodge of Accepted and Free Masons met at the A M. E. Metropolitan Zion Church from the Jurisdiction of North Carolina. There were more than 500 Lodges represented from all over the state. It was one of the largest meetings ever held in the Black community in Washington, and gained statewide attention for the excellent attendance and program that was offered. Mayor E. T. Steward welcomed the enormous crowd and the event collected $6,000 for the Jurisdiction. A huge parade was held in their honor and the assembly of Lodges that marched from Metropolitan A. M. E. Zion Church to another well-known and historic church, Spring Garden Baptist Missionary Church.

In the late 1960’s, the church was known for hosting forums on Civil Rights and voting, endearing itself to the community during the Civil Rights movement.

Metropolitan A. M. E. Zion Church, it’s Pastors and congregants have done great things in the Washington area which I will detail in another column.