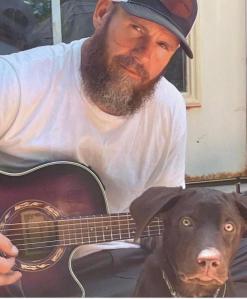 Jeffrey Kevin Hunnings, 43, passed from this life to his heavenly home on Sunday, January 15, 2023. The family will receive friends on Saturday, January 21, from 11:00-1:00 PM at Wilkerson Funeral Home. A private family service will be held. He was the son of Jeffrey Wayne Hunnings and Kathy Wier Hunnings. Kevin was born in Greenville on October 6, 1979. As a child, he enjoyed visiting his grandparents on the Bogue Sound, riding on his granddaddy’s lap while cutting grass, and sneaking into the candy jar to eat jelly beans whenever he could. He played Winterville Little League baseball from Pee Wee League starting with Coach Buck Deaver. Kevin’s dad started coaching a team when he was 9 years old. Starting their first game, Kevin talked his dad into letting him pitch and he pitched a No Hitter game that day. Upon going to Hargrave Military School, he played second base. He came back to D.H Conley for his senior year and went on to graduate from Pitt Community College where he graduated with academic honors in Welding. Kevin was hired in the Maintenance Department at Cherry Point where his welding career took off. From there, he received many certifications throughout his career to include welder, pipe fitter, and rigger being able to handle any job small or large, and was promoted to foreman. Kevin enjoyed being with his daughter, the water, fishing, and playing his Martin guitar and singing. Many friends knew him as KG. The family would like to thank everyone who was a part of Kevin’s life who helped to make him the kind and caring person he became. Kevin was preceded in death by his grandparents, William and Mary Hunnings, Lou Wier Johnson and John Wier; uncles, Gary Hunnings, Allen Smith, and John Carter Wier. In addition to his parents, Kevin is survived by his daughter, Susan Grace “Gracie” Hunnings; brother, Michael Lee Hunnings; fiancé, Tonya Ratliff Counts; uncles and aunts, William and Linda Hunnings, Mary Hunnings, Michael and Jo Ann Wier, and Jackie Wier Smith. Donations may be made to Hooker Memorial Christian Church, 1111 Greenville Boulevard SE, Greenville NC 27858 or a church/charity of your choice. Arrangements by Wilkerson Funeral Home & Crematory. Online condolences at www.wilkersonfuneralhome.com.