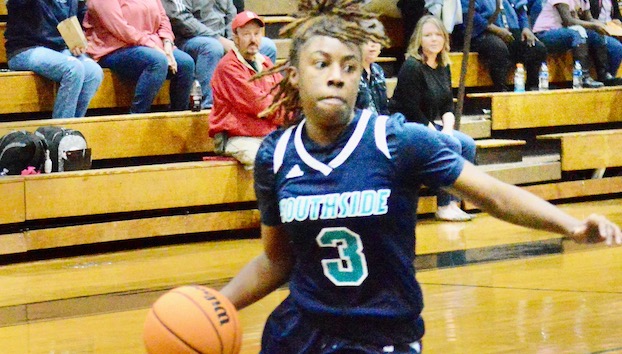 The North Carolina High School Athletic Association also noticed her record-setting night and chose it for the state-wide Performance of the Week award.

Southside’s bench and the official scorebook had O’Neal for 58 points in the Seahawks 81-68 victory.

After Ruffin reviewed the tape, the total was 56 points, 24 rebounds and 10 steals, good for a triple-double.

“I always review the tape to make sure everything is right, but even more so this year because she is close to some milestones,” Ruffin said. “We gave her two points that one of her teammates scored, but found several rebounds that we missed on the bench along with the correct number of steals. I just sat back and enjoyed watching the film after we graded it. She did whatever she wanted to on both ends and had an incredible night.”

The NCHSAA accepts nominations from around the state and chooses the top performance every week in the fall, winter and spring.

“Hopefully, this recognition will help Ka’Nyah reach her goal of playing high-level college basketball,” Ruffin said. “The more people who know about her around the state, the better. She works very hard, is a great team leader and gets it done in the classroom.”

After the revised numbers, her 56 points are tied for the sixth-most in state girls basketball history. She also needs 37 more points for 2,000 in her career and is 83 rebounds away from 1,000.

The Seahawks are 14-3 and have nine regular season games left.