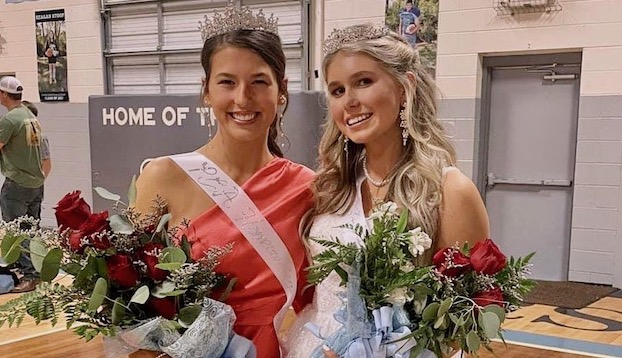 Both Raider teams split last week in their matchups against Ridgecroft and Albemarle.

Tuesday the Raiders traveled to Ahoskie to take on the Rams in a matchup of unbeaten teams. In the girls game, the Rams were able to out-rebound the Raiders down the stretch to lead by one point. However, the Rams missed seven of eight free throws in the final minute to give the Raiders a chance. Reagan Stoop’s potential game-winning three point attempt went long and the Rams sent the Raiders home with their first conference loss of the season, 45-43. Stoop finished with 18 points and 13 rebounds. Ginny Pugh and Abbey Cutler added nine points each.

The boys game was a tale of two halves. The Raiders were up by as many as 10 in the first half before a late Rams run cut the lead to one going into the break.

Raiders point guard Quay Artis picked up his fourth foul with over five minutes to play in the third quarter. With the Raiders already shorthanded with Davis Lee and Evan Woolard out, the Rams were able to go on a 16 – 0 run to take a 12 point lead going into the 4th quarter. Artis fouled out seconds into the fourth quarter, the first of four Raiders who fouled out in the game.  Ridgecroft went on to win 81 – 71. Maddox Lee had a season high 31 for the Raiders thanks to seven three-pointers. Austin Garrish (14) and Drew Van Staalduinen (11) were the other Raiders in double figures. Garrish, Van Staalduinen and Bo Spencer joined Artis with five fouls, leaving the Raiders with just four players to finish the game. The Raiders had one of their worst performances on the boards, getting outrebounded 41 – 26 in the game.

Friday PCA celebrated Homecoming with wins over Albemarle School. The Lady Raiders trailed by one going into the fourth quarter. PCA was able to turn up its intensity in the final eight minutes and outscored the Colts 20 – 5 to take home a 58-44 victory. Stoop led all scorers with 22 points and 21 rebounds. Allison Sawyer had a career night with 16 points. Alden Taylor chipped in nine points while Ginny Pugh dished out six assists and grabbed seven rebounds. Abbey Cutler pulled in eight boards for Pungo and was named Homecoming Queen.

In the boys game PCA jumped out to a 35 – 9 advantage after a quarter of play and never looked back, winning 78 – 31. Artis led the way with 15 points. He also dished out seven assists and grabbed six steals. Maddox Lee (13), Van Staalduinen (12), and Garrish (10) all had double figures for the Raiders.

The girls are 16 – 2 while the boys are 14 – 4. The Lady Raiders are currently tied for first in the Tar Heel Independent Conference after Ridgecroft School lost to Lawrence Academy Friday. They now control their own destiny with four conference games remaining. The boys are still a game back in 2nd place in the TIC standings. The Raiders can force a tie if they win their remaining four conference games.