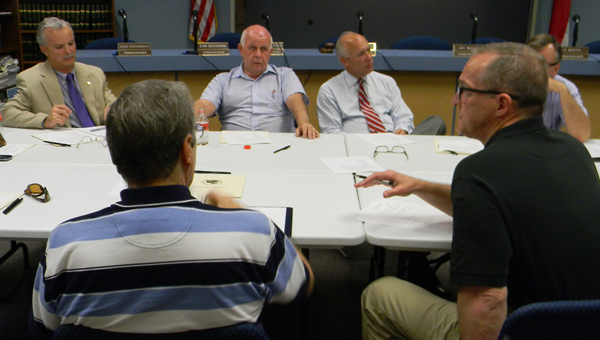 A group opposing construction of a new Beaufort County jail met at a local business Tuesday to discuss options to stopping a proposed $30 million jail being considered by the Beaufort County Board of Commissioners.

“We gotta get them to stop this stupidity and do what the people of Beaufort County elected them to do,” said Beaufort County Republican Party Chairman Keith Kidwell, who led Tuesday’s meeting.

Kidwell said the proposed project is not fiscally responsible and if a jail is needed, it should be voted on by county residents.

Kidwell agreed with a stance taken by Commissioner Hood Richardson: that the existing jail facility meets state jail guidelines and still has a useful life.

The jail has been a recurring topic at meetings of the Beaufort County Board of Commissioners. Electrical problems at the aging facility led to an evacuation of inmates in June for most of the summer.

There are many who agree that a new jail and law-enforcement facility is necessary. According to Sheriff Alan Jordan, the existing jail is not safe and a new jail would provide needed space to carry out daily operations, including meal preparation and sick calls. Jordan said that a better-constructed new jail would be more efficient and facilitate proper storage and organization of evidence, as well as improving conditions for inmate interviews.

The existing jail is located in the basement of the county courthouse, which, according to Jordan, presents possible risks of flooding during inclement weather. Jordan also expressed concern about perimeter security, specifically, public access to inmates.

“Right now you can walk out of my office and walk over to the jail and you can go right up to the window and communicate with inmates,” explained Jordan. “We have no secure area in which to evacuate inmates, nor do we have a buffer zone between the public and the inmates. It makes for a real security risk.”

After repairs and installation of new electrical equipment, the jail reopened in September, with Superior Court Judge Wayland Sermons Jr. ordering commissioners to “continue to plan and design a county jail that meets the minimum standards in the State of North Carolina.” Sermons’ order stated “such planning and construction shall proceed in as timely a manner as possible given the time restraints of architectural service, financing and construction times.”

During a commissioners’ meeting Feb. 3, Richardson made a motion to ask Sermons to dissolve his order, but the motion failed in a 4-3 vote.

“This is an incredible event you just witnessed,” Richardson said after the vote. “You’ve elected these people to look after your money. They’re not looking after it. They want to build a new jail. They don’t care what anybody else says. That’s a very defining moment for them in what’s going on here.”

Sermons further required the Board of Commissioners to submit a written progress report on efforts related to building a new jail before each administrative session (criminal) of Beaufort County Superior Court.

The commissioners are scheduled to meet at 5 p.m. March 3.