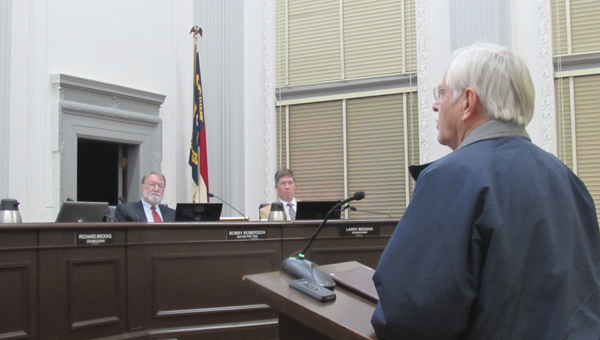 MIKE VOSS | DAILY NEWS
WHAT’S IN A NAME? Gil Alligood, airport advisory board chairman, explains the history behind the effort to change the name of the city’s airport

When the sign welcoming pilots and others to the new terminal building at the city’s new airport is erected it will read: Washington-Warren Airport.

Washington’s City Council changed the name from Warren Field Airport to Washington-Warren Airport during its meeting Monday. Discussion about several name possibilities included whether a hyphen (or dash) would be part of any new name.

The city’s airport advisory board had recommended changing the name to Washington-Warren Field. That initial recommendation came during the board’s Feb. 10 meeting. Last Friday, the board met in a special called meeting to possibly reconsider and change its recommendation. That did not happen.

Before the council began discussing the name change, Susan Zachary spoke on the matter.

“As it is, it will appear that Warren’s first name is Washington because they want it to be Washington Warren Field. A dash was not discussed,” Zachary said.

Zachary questioned a city document that indicates the name change will have no fiscal effect on the city.

“I don’t quite understand this because there is a brick sign out at the corner of Airport (Road) and Market Street that will have to be changed, not to mention all the bills to the vendors, the business cards, the state and county maps, the visitor brochures, all the maps for the FAA, the forms for the rentals of the hangars and the parachute school, the military use and it goes on and on,” she said. “So, I’m not quite sure why the city, county, anybody should be spending money on changing the name of an airport. I can’t imagine how it will not cost us money.”

Advisory board Chairman Gil Alligood, who voted against the name change at the board’s Feb. 10 meeting, “there has been an effort to make the airport more visible and known around the community and the area, and one of those things might be if you change the airport name.”

Councilman Doug Mercer, the council’s representative to the advisory board, said he’s aware of that confusion.

“I’ve listened to this discussion over the last year or so, and there’s been a constant discussion over the concerns with people flying in and think they’re in Warren County or think they’re in Washington County. I think if we can take some steps to make that a more distinct name — I see Washington-Warren. The signs and everything out there say ‘airport,’ so, I think it should say ‘airport,’” Mercer said.

The airport is named for Lindsay Carter Warren, a North Carolina congressman born in Washington. Warren served eight terms as a congressman. He resigned from Congress in 1940, after first being elected in 1925, to serve as comptroller general of the United States. He also served several terms as a member of the N.C. House of Representatives, before and after congressional terms.