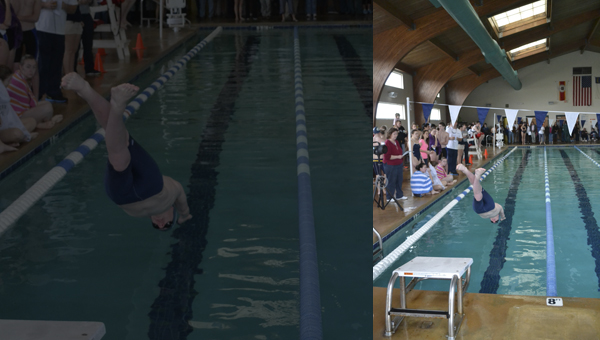 FILE PHOTO | DAILY NEWS
POOL’S FUTURE: Washington’s City Council is considering whether to shut down the city pool. Washington High School’s swim team for competitions uses the pool. Memberships help pay to operate the pool, but the revenue generated by those memberships do not cover the cost of operating the pool.

Washington’s City Council wants more information before deciding what to do with the city’s pool — including shutting it down — at the McConnell Sports Complex.

The fate of the pool, which costs the city more to operate and maintain each year than the revenue it generates, was discussed during the council’s meeting Monday.

Councilman Doug Mercer, who said the council needs to make a decision concerning the pool’s future, suggested contacting the state’s Parks and Recreation Trust Fund to determine if the city returning the $250,000 it received in PARTF funds would free the city from its contractual obligation regarding operating the pool.

City Manager Brian Alligood said he talked with John Poole, the state official who oversees PARTF, about the pool (which was built about 14 years ago).

“His comment to me was you’re under a legal contract with the state of North Carolina for 25 years. You have the taxing authority to raise taxes (to cover costs associated with the pool)… and that’s his position,” Alligood said.

Mercer contends that returning the $250,000 to the state would result in any contract conditions “going away.”

“I would go to court with that argument,” Mercer said.

Poole, according to Alligood, said that if the city were allowed to return the money, it would no longer be eligible to receive PARTF money in the future.

City Attorney Franz Holscher said he’s not aware of the conditions of the contract the city and PARTF signed years ago. Holscher said he’d have to research the matter to determine what options, if any, the city may have in regard to possibly returning the $250,000 to the state and closing the pool. He also said it’s his understanding that PARTF guidelines provide that if a PARTF-funded facility is removed, it must be replaced with a similar facility.

“Every time the state tells us, ‘You’ve got a contract,’ we go cower in the corner. It’s time for us to stand up for our rights and tell the state we’re voiding that contract by returning your money. …  The state is not all-powerful, guys. We’ve got some rights and we need to stand up for them,” Mercer said.

“As far as I’m concerned, gentlemen, we ought to get out of the pool business,” he said, adding that if the pool is to be closed, the city should set a deadline for doing so and inform people who use the pool they need to look elsewhere to meet their pool needs.

Councilmen Larry Beeman, Richard Brooks and William Pitt said they want more information, including copies of the contract, before they would make a decision regarding the pool, with was paid for, in part, by money raised by a community fundraising effort spearheaded by Judy Jennette, a former council member and mayor.

Councilman Bobby Roberson said if the council were making a purely business decision regarding the pool, it would be shut down. He said it would have a hard time increasing the city’s tax rate to help pay for keeping the pool open for the 200 to 300 people who used the pool regularly.

Roberson, noting he prefers not to close the pool, said the city should explore possible alternatives to keeping the pool open, but closing the pool remains a possibility.