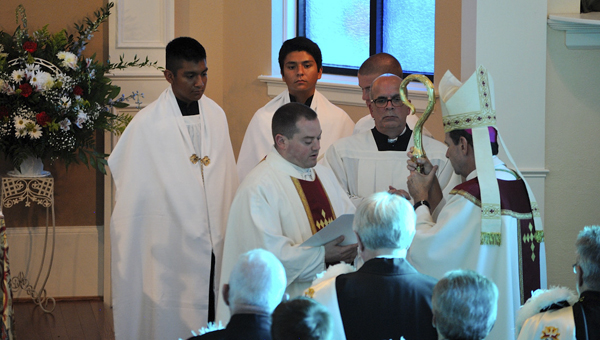 MOTHER OF MERCY CATHOLIC CHURCH
INSTALLATION: Mother of Mercy Catholic Church celebrated the installation of Father Brendan Buckler, former administrator of the church, as priest of the parish Monday night. Pictured, Buckler renews his promises he took at ordination in obedience to the bishop of the Diocese of Raleigh and the teachings of the Catholic Church and Christ passed down from the apostles.

A father is often considered to play an important role in any family. He is typically a mentor, a role model, a guiding light to his children and, in some cases, a beacon of strength for his family and community. But a local Father, head of a much bigger family, renewed his commitment this week to lead his church in the ways of God and the Catholic Church.

Mother of Mercy Catholic Church of Washington recently celebrated the installation of its then administrator Father Brendan Buckler on Monday night. Bishop Michael F. Burbidge of the Catholic Diocese of Raleigh joined Buckler and the congregation for a special mass, which included the solidification of Buckler’s tenure at the church as priest, or pastor, Buckler said.

At the installation, Burbidge presented the parish to Buckler and asked him to renew the promises he took at ordination in obedience to him, an oath of fidelity, solidifying his union with the church and the teachings of Christ passed down from the apostles, Buckler said.

“When he installs you as pastor, it’s more definitive,” Buckler said. “You’re now really the pastor, a shepherd of the community, and you have that stability.”

Buckler has served as administrator the past two years, building a strong relationship with the congregation and the community. Now, as priest, he will continue his work, ministering to the Catholic community and conducting outreach to others in the community. Typically, a priest serves a parish for about six years, something Buckler looks forward to as he continues his involvement in the community.

Buckler said he will use the time to instill habits of holiness among those in the parish through celebration of the sacraments of the Catholic church with love, attention and devotion.

“It’s definitely exciting and relieving to know I’m going to be here for a bit longer and not having to go and start over somewhere else and to be able to take care and minister to the people of this community,” Buckler said. “You kind of have that renewed zeal to minister to the local community. We want people to be sanctified and walk with them to Heaven. And essentially, my aim is to help people build up the things necessary for their salvation.”

And as the parish looks to its new priest, it means to continue its outreach of love to those in the community. A young man from out of town came to the church one day, cold, hungry and homeless, according to church member Carol Montgomery.

Buckler and members of the parish gave him food from the church’s pantry, as well as a blanket and warm clothes, and took him to a shelter — acts that the church frequently carry out, feeding those in need in the community and ministering to people, Montgomery said.

“Love is the No. 1 thing that brings people in,” Montgomery said. “It’s also such a great relief to the parish. We know Father (Buckler). We know he’s a loving person. When you have a priest that is willing to do that, we’re all thrilled to death. Father digs in and just helps anyone.”