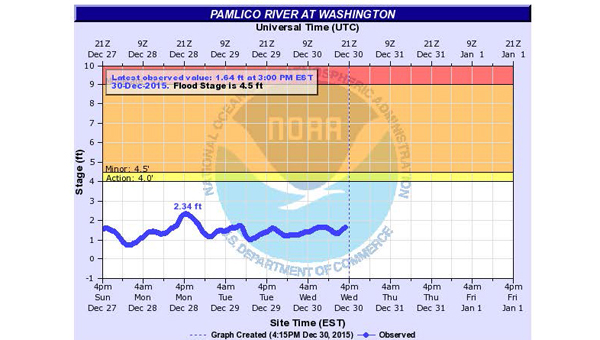 UPS AND DOWNS: This graphic depicts the levels of the Pamlico River at Washington since 3 p.m. Sunday through 3 p.m. Wednesday.

The level of the Pamlico River at Washington continues to rise at a slow, steady pace, something it began doing Tuesday, but one area emergency management official is not too worried about that situation.

A warm and moist air mass moving through eastern North Carolina brought heavy rain Wednesday. That rain is expected to taper off as the week progresses (70 percent chance of rain today) through Friday night (20 percent chance), according to the National Weather Service in Newport. Rainfall amounts are predicted to be about 1 inch to 2 inches. Sunny skies are forecast for Saturday.

“I’m monitoring it. It does not look like it’s going to become an issue,” Pack said Wednesday. “We’re monitoring it because we’ve got (flood-prone) areas like the VOA Road and that type thing, but if the river gets too high, (those areas) won’t drain. … The fire chief with Clark’s Neck (Volunteer Fire Department) has got people monitoring the different levels … back on Cherry Run Road. As it goes on Cherry Run Road, if the river gets too high, it will back up to VOA. We’re monitoring it and trying to staying on top of it.”

The section along the Tar River from Rocky Mount to Greenville is under a flood warning through Sunday, according to the NWS office in Newport. The river is expected to rise to near 15 feet above normal by Friday morning, then fall below flood stage by Sunday afternoon. The flood stage in Greenville is 13 feet.

If the Pamlico River level reaches 4 feet above normal, water backs up in Rodman Creek, which runs by Twin Lakes Campground, and floods Whichard’s Beach Road and roads in Bayside Shores, according to the NWS’s Advanced Hydrologic Prediction Service. At flood stage (4.5 feet), the river and Chocowinity Bay begin to flood Twin Lakes Campground, Bayside Shores and Portside, according to NWS data, and minor flooding begins in Washington.