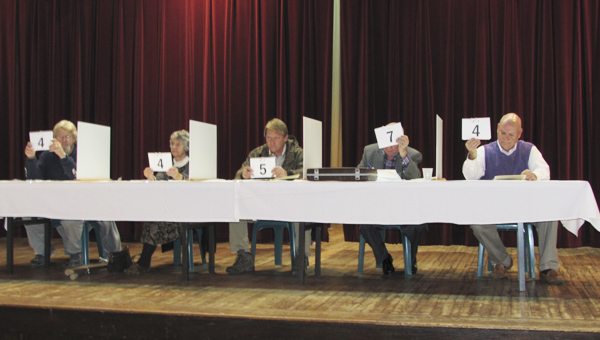 MIKE VOSS | DAILY NEWS
AND THE WINNER IS: Judges for the North Carolina Waterfowl Conservation Stamp contest show their scores for one of the 31 entries. Garrett Jacobs’ painting of a brant won the competition. Contest rules prohibit publication of photographs of entries until the top five entries are unveiled to the public at the upcoming East Carolina Wildlife Arts Festival.

Garrett Jacobs’ painting of a brant is the winner of the North Carolina Waterfowl Conservation Stamp competition.

Jacobs, who lives in Orlando, Fla., plans to attend the East Carolina Wildlife Arts Festival and North Carolina Decoy Carving Championships the weekend of Feb. 5-7 in Washington for the unveiling of his winning entry. The duck-stamp competition serves as a prelude to the festival.

“I can’t believe it. I can’t believe it,” Jacobs said in a brief telephone interview Wednesday afternoon, about an hour after the judging for the contest concluded. “I really thought it was a joke that my brother or my mom was playing on me. My brother would tease me. I’m originally from New Jersey, and they’re up there now. I thought they were playing a joke. … It’s my first time winning any competition, actually.”

Jacobs won the North Carolina competition in his second attempt. He scored 41 points out of a possible 45 points. He’s placed in the top 20 entries in three federal duck-stamp competitions.

Jacobs said he became interested in wildlife art in 1980 while attending Oral Roberts University in Tulsa, Okla. A plastic surgeon at City of Faith hospital steered him in the direction of wildlife art, urging him to enter the federal duck-stamp competitions, Jacobs said.

“At first, I was horrendous. I did not know what I was doing,” Jacobs said. His artwork began improving as he talked with experienced and award-winning wildlife artists, Jacobs noted.

At least two artists whose entries made the top five are expected to attend the festival, Wingate said. They are Jacobs and Cory James McLaughlin from Wells, Texas. His painting finished third in the contest.

Neal Woolard, one of the five judges and a Beaufort County resident, was impressed with the quality of the entries.

“I think it (quality) was really good in the top five that we picked. We probably cut out more in the in-and-out round to start off with than we have in years past,” Woolard said. “It goes back to the fact we’re attracting so many more artists now, and it kind of thins out things toward the bottom because the quality if getting better at the top, if that makes sense.”

Woolard noted that recent winners of the annual competition “are spread out in more states than they used to be.” “Incidentally, the last two winners here were artists of the year for Ducks Unlimited in 2014, 2015. So, that gives you an idea of the quality of folks we are attracting right here in Washington,” Woolard said.

Jacobs’ blue-ribbon entry will be used as the artwork for the 2016 prints and ducks stamps sold to help pay for North Carolina’s portion of the North American Waterfowl Management Plan, an international agreement aimed at protecting waterfowl and waterfowl habitat. The sales of prints and stamps also support waterfowl research and purchases equipment used in wetlands management.

This year, artists were asked to submit artwork featuring tundra swan, gadwalls, buffleheads, blue-winged teals or brants in their natural habitats. Each species was represented in the competition.

Jacobs will receive $7,000 in prize money and a $300 travel allowance to help him or her attend the festival. The top five entries will be exhibited during the festival.

The annual wildlife festival, began by the East Carolina Wildfowl Guild and now managed by the Washington Tourism Development Authority, draws some of the best wildlife artists, decoy carvers and wildfowl callers in the nation. The three-day event also brings customers to area businesses and visitors to the city during what is the slowest time of the year (when it comes to sales) for most of those businesses.

A one-day pass to the festival costs $7, with a three-day pass costing $12. Children under 12 years old are admitted at no cost. Tickets may be purchased at the Washington Civic Center.