Benkert to transfer from ECU 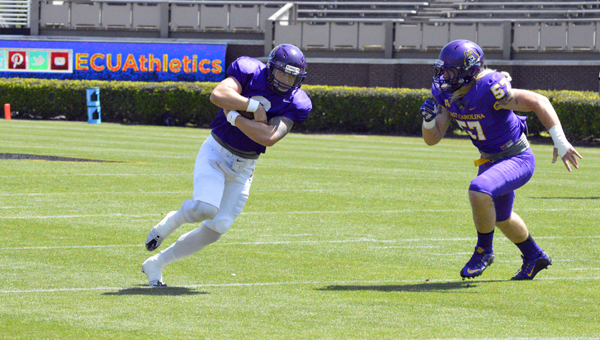 MICHAEL PRUNKA | DAILY NEWS
SNEAK PLAY: Kurt Benkert runs a quarterback draw in ECU’s spring game a few weeks back. It was announced Monday that Benkert, who learned under former Pirate signal caller Shane Carden, would transfer from the program.

GREENVILLE — East Carolina junior quarterback Kurt Benkert has decided to transfer out of the Pirates’ program according to an announcement from head football coach Scottie Montgomery on Monday afternoon.

Benkert, who was sidelined during the entire 2015 season after suffering a knee injury last Aug. 25, did not immediately indicate where he would finish his collegiate career.

“While it was initially disappointing to hear, our immediate focus needs to remain on Pirates who want to be Pirates,” Montgomery said. “We had a very competitive spring at many positions and the objective is for that energy, work ethic and ambition to continue throughout the summer and into preseason camp. I am impressed by the leadership we currently have in place on this team and my confidence in those young men grows on a daily basis.”

After successfully completing a rehabilitation assignment last fall and winter, Benkert was fully cleared to participate this spring and competed against senior Philip Nelson for the Pirates’ starting position. Montgomery and offensive coordinator Tony Petersen were in the midst of an ongoing evaluation process at the time Benkert informed both coaches about his decision to depart ECU.

Benkert played in three games as a redshirt freshman behind Shane Carden in 2014, completing eight-of-10 passes for 58 yards and suffering one interception. He also scored a pair of touchdowns on five carries.

“I am saddened to announce that I am transferring from East Carolina University,” Benkert said. “I am very blessed for the opportunity that ECU has given me in obtaining my degree, and am forever thankful for the support from such great coaches, teammates, faculty and fans. This was a very tough decision that came from a lot of sleepless nights and conversations from those close to me. With that being said, I feel it is in my best interest to explore other options for graduate school. Thank you again Pirate Nation for the support throughout the last three years, it was never unnoticed and I will forever be grateful for it.”

Benkert, who has two years of football eligibility remaining, is on track to earn a bachelor’s degree in business administration with a concentration in finance during ECU’s Spring Commencement on May 6.