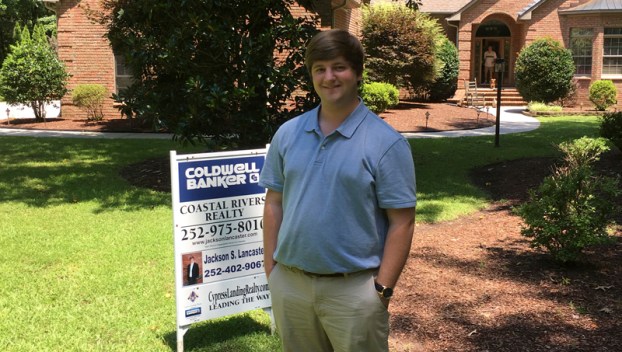 UNDER 30 CROWD: Jackson Lancaster was recently recognized as a young person to watch in real estate by international company Coldwell Banker Real Estate. Lancaster is pictured in front of one of his many local listings, the Cypress Landing home of Dave and Joyce Denning. (Vail Stewart Rumley/Daily News)

While other children were playing “cops and robbers” and riding bikes pell-mell down the streets of the neighborhood, Jackson Lancaster was riding around those same streets, attending open houses and picking up brochures of homes for sale.

Fast forward a few years, and at the age of 19, he’s earned his real estate license, enrolling in the course a week before he finished his combination high school diploma/associate degree from Beaufort County Early College High School.

Now, at 21, Lancaster has earned international recognition from Coldwell Banker Real Estate. Recently named one of its “30 Under 30” recipients, Lancaster has defined himself as one of Coldwell Banker’s top young real estate agents in the world, among 85,000 professionals working in 47 countries. His 29 co-recipients span the globe; he’s the first North Carolina real estate agent to win it.

The recognition is certainly rewarding, but for Lancaster, it’s simply part of a dream come true.

That dream, and how it started, is spelled out in a letter from Lancaster’s parents, Terry and Louann Lancaster, that was sent with his Coldwell Banker Coastal River Realty coworkers’ nominations for the “30 Under 30” award.

“At age 8, we had a two-story playhouse built for him in our backyard. It didn’t take long to see this was going to be his real estate office,” the letter reads.

Lancaster named his real estate “company” Bonner Street Realty and posted his collected MLS sheets on the walls. Wherever the family traveled, Lancaster would pick up brochures and real estate magazines, according to his parents’ letter. Later, his parents began taking him to open houses, where he met Gerri McKinley, broker and co-owner of Coldwell Banker Coastal Rivers Realty.

“At 8 years old, he would see where I was holding an open house, and he would come sit with me, watching and observing how to talk with buyers. This continued off and on for many years,” McKinley wrote in her nomination.

Broker Diane Edwards shared a similar story: Terry and Jackson Lancaster attending one of her open houses — Terry Lancaster explaining to her why he and his son were there  — after which Edwards sent Lancaster a ‘thank you’ card.

“For me, one of the greatest memories is that Jackson still has that open house ‘thank you’ card,” Edwards wrote. “It reminds that me that best practices are important and maybe I helped a little bit with fulfilling a child’s dream.”

When Lancaster graduated from the JY Monk Real Estate School, McKinley offered him a job on the spot — a decision she does not regret.

“He is a true achiever in everything he does. He is totally committed to his work and his clients, is very professional, and he is a true southern gentleman,” McKinley wrote.

In his first year, Lancaster sold more than $4 million of real estate, according to McKinley. In his two years on the job, he’s nearly doubled that, selling more than 60 homes while attending East Carolina University full time. He’s getting a business degree to “go along with the real estate,” he said.

In October, Lancaster will attend Coldwell Banker’s international conference, Gen Blue, in Miami to accept this award. It could lead to future business, speaking engagements and more, and it’s still sinking in for him.

“It’s a little surreal, being from such a small town in a rural area,” Lancaster said. “It’s something that’s hard to win in an area like ours.”

That’s because his nomination was up against people in areas where a single sale is worth millions. But it’s not the dollar amount that matters; it’s his passion for the work, according to McKinley.

That passion is evident when he talks about the job — about the “perfect home” expression he sees on clients’ faces when they walk into “the one.”

“This is what I’ve always wanted to do,” Lancaster said, adding with a laugh, “As long as the market’s fine.”

The Heart of the Inner Banks — that’s how visitors know Washington and greater Beaufort County. The main draws are,... read more