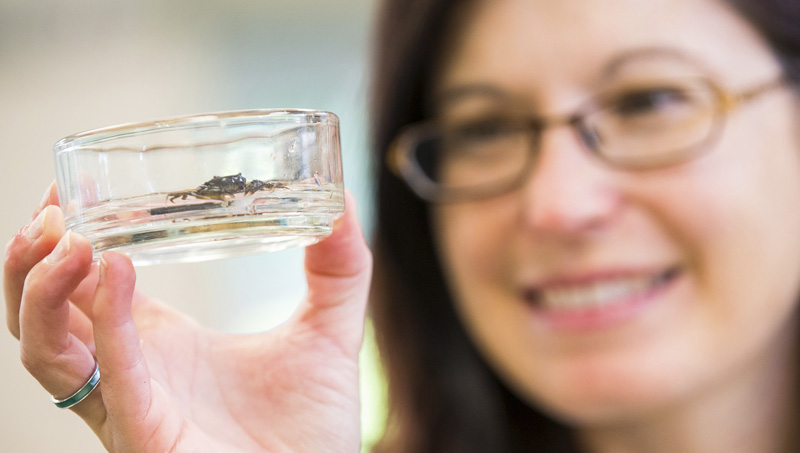 Researchers at East Carolina University have been studying the parasite, a barnacle called Loxothylacus panopaei or Loxo, for short, according to April Blakeslee, assistant professor at the ECU Department of Biology. The parasite is native to the Gulf of Mexico and is believed to have spread to the East Coast via an oyster relocation project decades ago in the Chesapeake Bay, Blakeslee said.

Now, the parasite has been found in waters stretching from as far north as Long Island down to Florida, which is problematic for mud crabs in local waters. Although researchers knew about the parasite in decades past, Blakeslee and other ECU researchers are make a concentrated effort to see how the infection is affecting organisms, food webs and ecosystems, she said.

Blakeslee and her team have led an effort to find out how local mud crab populations are being affected in the Pamlico and Neuse river systems, she said. This summer, the group put out several “crab condo” habitats to draw the species in for research. So far, habitats have been placed at the North Carolina Estuarium, Goose Creek State Park and down towards the Bath area, according to Blakeslee.

The infected crabs can no longer reproduce, leaving the high potential for populations to diminish and affecting an important component in food webs, Blakeslee said.

The parasite infects the mud crabs by essentially castrating its host, completely cutting off reproduction, Blakeslee said. The barnacle’s larvae penetrate and develop a series of roots inside the crabs, also affecting the host’s nerve center.

“It’s detrimental to the host crab because they can no longer reproduce their own young,” Blakeslee said. “We call it a body-snatching parasite because it takes over from throughout the inside of the crab. The crabs are fooled into thinking (the parasite’s larvae) is its own brood sack so it cares for it. It does this to males as well so it feminizes male crabs and makes them think they’re also holding young.”

“We’re really interested in how they adapt to this, the prevalence of infection and how many are infected by the parasite,” Blakeslee said. “If (mud crabs) have adapted to low-salinity waters, it’s a refuge from the parasite. When you have a high parasite pressure, you’d expect to see more crab populations in lower-salinity waters. They also build some kind of physiological resistance, like immunity to the parasite. Because it’s such a relatively new invasion here, these crabs are having to take some time to adapt to the parasite. So it’s just really a selective thing going on here.” 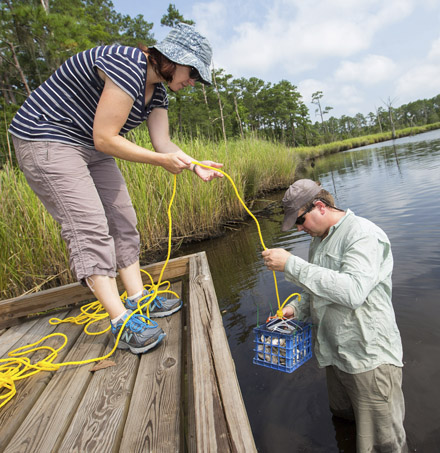 EAST CAROLINA UNIVERSITY
FISHING FOR AN ANSWER: April Blakeslee and Christopher Moore, a graduate Biology student at ECU, set out habitats in the Pamlico River to draw mud crabs in for research.

“Once you shift that balance, you can see the whole ecosystem affected,” Blakeslee said.

Researchers have yet to find whether the parasite can potentially harm other organisms, or the overall ecosystem.

“It’s hard to say whether this will affect things on a bigger scale,” Blakeslee said.  They’re part of this community, and since they’re prey for other species, it could have an effect, but it’s hard to know. We haven’t looked at it to that level yet. Studies have shown when you have these food webs and you affect, especially part of the middle of the food web, it can affect a larger part of the community.”

The research will continue throughout the year, with the biologists observing the habitats every six to eight weeks, Blakeslee said.

Christopher Moore, a graduate student in biology at ECU, said the research has incorporated citizen science, bridging the gap between laboratory science and hands-on learning. It’s also opened up collaboration with other entities such as Goose Creek and the N.C. Estuarium. Residents, who have become aware of the research, have expressed interest in getting involved and learning about the science of the parasite’s affect on mud crabs, Moore said.

“It’s rewarding because it connects the education with the hands-on experience,” Moore said. “People have shown interest and want to get involved. It’s sort of taking off. I’ve been involved in projects in the past, but we’re happy to see this level of interest.”