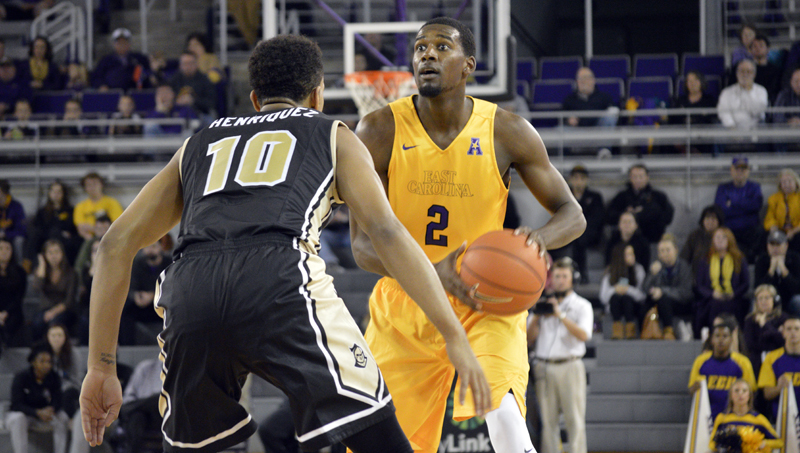 Caleb White faces a defender on the perimeter during a game last season. White has had to move around the court a lot during his career due to injuries to ECU’s big men. He’s looking forward to playing his more natural guard spot this season.

GREENVILLE — East Carolina basketball hosted its annual media day on Thursday ahead of Friday’s first practice of the season. With the Nov. 11 season opener vs. Grambling State just around the corner, there was an excitement in the air among both players and coaches.

A lot of the players were especially eager to get to work. For the first time in recent memory, the Pirates have not only an inside presence, but also depth at the forward positions.

The Pirates have been short staffed inside in recent years. Injury problems with Riak and Marshall Guilmette, among others, have forced ECU to move players around to compensate. Those same players, barring injuries this season, have the luxury of returning to their natural positions.

“It’s always tough, as a coach, when you have to go to a player and find a role for him,” ECU coach Jeff Lebo said. “But that’s part of being a player, and it’s something we’ve addressed here this year. We’re going to find a role for you, but you, as a player, have to be prepared for that to change.

“We don’t know and we can’t control everything. It’s never easy, but we’ve had to do it out of necessity the last couple of years because of injuries. We’ve had some guys really have to sacrifice.”

Few Pirates have sacrificed in that regard more than senior Caleb White. The 6-foot-7 Virginia native is naturally a guard, but has been asked to play plenty of forward throughout his time in the Purple and Gold.

“Caleb is one of those guys that has had to play all over the court, so he’s as excited as anybody to see some big guys down there,” Lebo said.

White added, “I’m very excited. I think we’ve closed the talent gap. We’ve got a lot of talent in here, as well as accommodating that size. … I’m definitely excited to use my size against smaller guards and be back where I’m more comfortable this year.”

Fellow senior Michel Nzege has been asked to do a lot of the same things down low that White has.

“It feels good,” he said. “Playing basketball is all about adjusting and being able to adjust to the situation. I had to play small five a lot of the past couple of years. I’m excited that we have Andre and Jabari Craig, who you’re going to see is a very exciting player. … It’s exciting for me to be able to play my natural position at the four spot and do things that I can do at a high level.”

The size inside should give ECU an important defensive boost. The small lineup its had to run in the past has paid off on the offensive end, but the Pirates have oftentimes come up on the glass and in defending the paint.

Moreover, the experience players like White, Nzege and others have playing different positions will come in handy. That versatility gives Lebo the opportunity to run a smaller lineup as a strategic move rather than a necessary one.