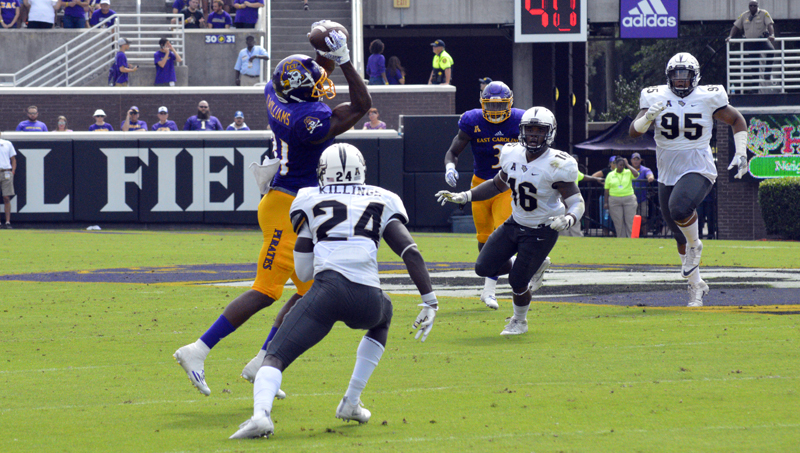 Jimmy Williams makes a leaping grab in last week’s game against Central Florida. He only had one catch in ECU’s 38-22 loss at South Florida on Saturday. It marked the Pirates’ fourth defeat in a row.

South Florida put the game away shortly thereafter. Backup quarterback Gardner Minshew, who entered for an injured Philip Nelson for the second week in a row, was picked off by Nigel Harris with 2:38 left. Harris returned it 34 yards to ECU’s 17-yard line, and Marlon Mack scored two plays later. It was Mack’s second touchdown of the day. He finished with a game-high 152 rushing yards.

Minshew helped lead a pair of touchdown drives ECU. He finished the game 21-of-33 for 220 yards. 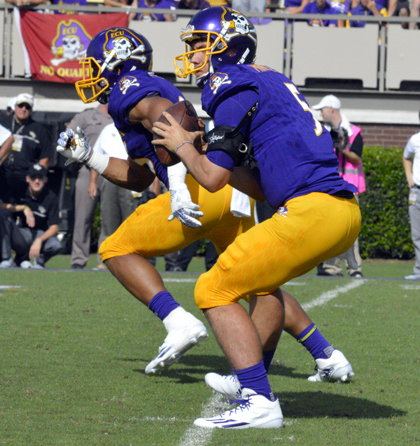 Backup quarterback Gardner Minshew takes a snap against the Knights last week. He had to come off the bench again at South Florida.

The Pirates, who received the opening kickoff, stuck to an uncharacteristic run-first approach on offense early on. Summers took off for 21 yards on the first play from scrimmage, and the Pirates ran eight straight times before attempting a pass. They stalled out at USF’s 23-yard line. Davis Plowman nailed the 40-yard field goal to draw first blood.

ECU’s defense held the Bulls on their first drive, but the offense went three-and-out to quickly return possession to the hosts. The Pirates masked their special teams deficiencies by using short kickoffs. USF started in ECU territory and used an 11-play, 45-yard drive to take a lead it wouldn’t concede. Flowers hit D’Ernest Johnson on a 6-yard touchdown pass to go ahead.

The two sides traded successful field goals. USF held a 10-6 edge with less than four minutes to play in the first half. Plowman missed an attempt from 42 yards out. The Bulls got the ball back on their 25-yard line with 1:52 to work with.

It proved to be more than enough time. A 41-yard connection between Flowers and Mitch Wilcox put the Bulls inside ECU’s 10 to set up Flowers and Johnson for their second touchdown connection — this time from 11 yards out.

USF, leading 17-6, stalled on its first drive of the second half. Its defense forced the Pirates three-and-out before the Bulls and their potent ground assault cashed in again. USF picked up four first downs on a 10-play drive that was capped off by Mack’s first score of the afternoon.

Nelson and offensive lineman Justin Sandifer went down on the following drive. That didn’t stop Minshew from seamlessly stepping in an carrying ECU to its first touchdown of the game. He found Deondre Farrier wide open on a defensive breakdown by the Bulls, and Farrier hauled it to the 1-yard line before being brought down.

Minshew was able to find Zay Jones in the end zone for the touchdown. Jones finished the game with 18 catches for 145 yards.

ECU’s defense held. Another field goal by Plowman made it a one-possession game, 24-16, with 11:49 to go. The Pirates forced the Bulls three-and-out to lead into Summers’ touchdown. A fade pass on the 2-point conversion went incomplete, and the Bulls didn’t wait long before pulling away again.