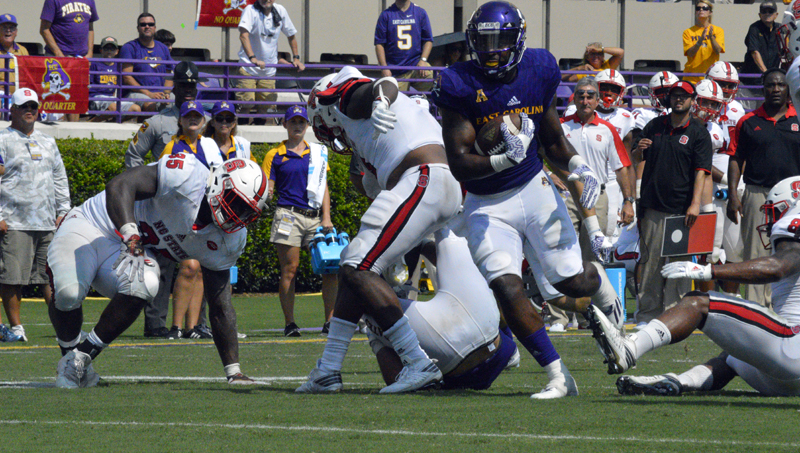 James Summers runs for a touchdown against N.C. State. Summers had been a Swiss army knife, do-it-all kind of player for the Pirates, but saw much more consistent action at the running back spot against South Florida.

Even so, the odds continue to stack against ECU, which is in the midst of its first four-game losing streak in over a decade. Hurricane Matthew forced the team to redirect its flight and land in Richmond Saturday evening. The Pirates took a bus from there to Richmond.

“It’s good to be back in Greenville after a road game against USF, who was definitely a good opponent,” coach Scottie Montgomery said in Monday’s press conference. “We feel like we found out a lot of things about our team down there in some adverse conditions against a good football team.”

The Pirates were bailed out of further challenges presented by a short week when the university made the decision to reschedule Thursday’s game against Navy for No. 19. The Pirates and No. 25 Midshippmen both had an open date that week.

In the meantime, though, ECU is addressing everything it can internally. Quarterback Philip Nelson was not listed on the injury report at Monday’s press conference. Nor were defensive back Corey Seargent or defensive lineman Demetri McGill.

While injuries continue to be a cause for concern, Montgomery and the Pirates are focusing on the schematic things they have complete control over.

They addressed a lot of the team’s deficiencies on special teams and with ball security. The Bulls weren’t able to gash ECU on kick returns.

“I thought special teams came back to be an asset for our team,” Montgomery said. Davis Plowman made three of his four field-goal attempts. “We’ve done a lot of work on that.”

The Pirates also didn’t squander red-zone opportunities by turning the ball over. Backup quarterback Gardner Minshew threw one interception, and no one put the ball on the ground.

“We talked about ball security quite a bit,” Montgomery said. “We thought James (Summers) did a good job protecting the ball and protecting the quarterback at the running back position.”

Zay Jones continues to be ECU’s stalwart in the passing game. He caught 18 passes for 145 yards and the team’s only aerial touchdown. Meanwhile, Summers is proving that the team’s offense evolves with him. He’s among the team’s best playmakers, as he proved with his 18 carries for a team-high 118 yards.

Prior to the game, Summers had been used mainly as an alternate quarterback for specially designed plays. Montgomery said that getting involved on a more frequent basis is going to take an adjustment on Summers’ part.

“Coming in and going out for four plays, it’s a lot different than carrying the ball and being responsible for ball security every play,” Montgomery said. “It’s like if a receiver catches the ball, he’s much more fatigued than if he doesn’t catch the ball.”

As the Pirates make strides on those fronts, Montgomery continues to take solace in the disciplined football the team is playing. ECU committed just two penalties for 19 yards at USF. Opponents thus far have been flagged 19 more times for 158 more yards.

The record would show things haven’t been going ECU’s way over the past month, but the team has made noticeable improvements, especially considering certain circumstances like injuries. This off week, which was originally scheduled for Nov. 19 before the season finale at Temple, could be a blessing in disguise.