Come join us at the Historic Port of Washington 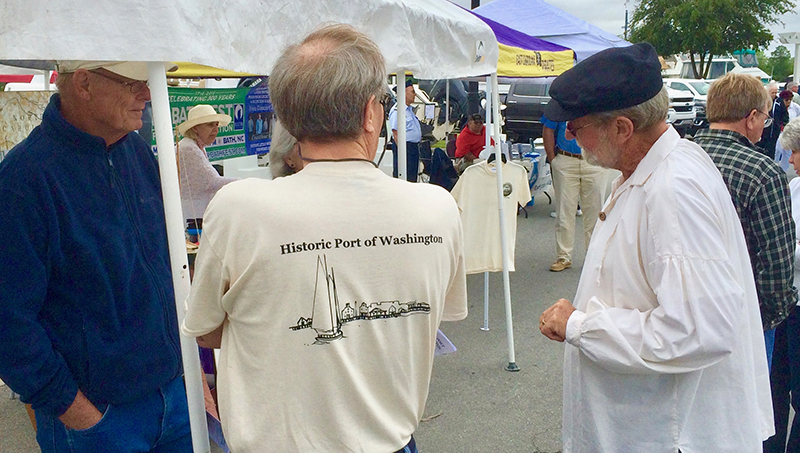 MEETING OF THE MINDS: Blount Rumley, in Historic Port of Washington T-shirt, and Rick Zablocki, in period garb, talk about the HPOW Project during last year’s Marine Market on the Washington waterfront.

Washington’s most important asset is its riverfront. A walk along Stewart Parkway on most days reveals folks engaged in numerous activities: strolling their dogs, enjoying the Pamlico River sunset, basking under a gazebo or teenagers tossing a frisbee in Festival Park. All are enjoying the delightful view of the river.

Flashback 120 years and the scene is much different. The vista is that of a bustling sea port populated by piers, mills, a cooperage, freight and passenger terminals and even an oyster cannery. The waterfront at that time was home to some of the busiest shipyards in North Carolina. Daily, the port witnessed vessels — schooners, steamships and paddle wheelers — arriving from such exotic locales as the West Indies and departing for not so exotic destinations as New York City or even Tarboro. From its founding, it has been the mission of the Historic Port of Washington Project (HPOW) to share the unique maritime heritage and riverine history of Washington and Beaufort County.

The Historic Port of Washington Project has ended its second year of operation as a nonprofit affiliate of the Arts of Pamlico. Since its founding in 2014, HPOW has opened a museum project space at 132 S. Market St., greeted over 700 visitors, hosted dozens of new events, lectures, exhibits and outdoor events, logged over 3,000 volunteer man-hours and introduced many topics of local history interest to the broader community. New exhibits this year include “Lifestyles Turn of Century Washington,” “300th Port Bath 1716-2016,” as well as a children’s room with activities designed to engage children in Washington’s past. During the Christmas holiday season, HPOW hosted an open house featuring a model train layout provided by local model train enthusiasts. HPOW sponsored lectures at the North Carolina Estuarium including “Port of Bath’s 300th Anniversary,” “British Colonial Customs Service 1716-1790,” and “The Pamlico’s Age of Sail and the Age of Steam.” HPOW lectures at the museum covered “Treasures of the Long Leaf Pine: Naval Stores in Eastern North Carolina,” and “Sharpies of the Pamlico, the Little Boat That Could.” During the 2016 Washington Marine Market, HPOW hosted Gene Oakley, an expert on steam engines. Oakley demonstrated at the HPOW exhibit scale model replicas of steam engines that were used to power historical vessels that plied the Tar and Pamlico rivers.

The Historic Port of Washington Project will be holding its first annual membership meeting this coming Oct. 26 in the exhibit hall of the historic Turnage Theatre from 6-8 p.m. The public is invited to attend. We are looking for people interested in helping us with our mission, both through volunteering and through financial contributions. Following the meeting, be prepared to enjoy our special guest speaker! For more information on how you can help make a difference in the lives of so many in our community, we invite you to visit our website at www.hpow.org, follow us on Facebook at www.facebook.com/historicportofwashington or visit us in person at the HPOW Museum at 132 South Market Street in Washington on Saturdays between the hours of 9:30 a.m. until 1:30 p.m.

Ray Midgett is one of the founders of the Historic Port of Washington Project.

Back to basics: the kettlebell