Pirates hope for win to propel them forward 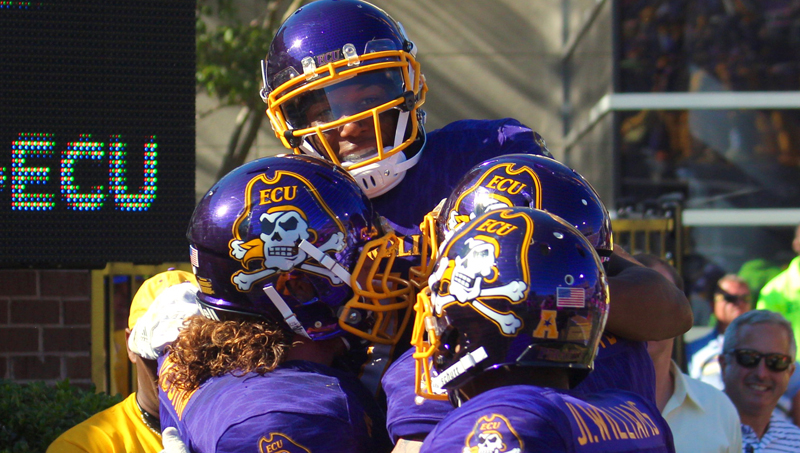 Phillip Nelson, Jimmy Williams and other Pirates celebrate a touchdown during Saturday’s lopsided win over Connecticut.

GREENVILLE — East Carolina didn’t turn the ball over. It was perfect on its five trips to the red zone. It pressured Connecticut quarterback Bryant Shirreffs, sacking him four times. Special teams played well, even forcing a fumble, and the defense came up with a pair of interceptions.

Indeed, Saturday was the most complete game the Pirates have played this season. All the issues that had been plaguing them — namely one sack through seven games, abysmal performances on special teams, and red-zone turnovers — suddenly disappeared.

“Once I went back and looked at tape, there were plays that we almost made that people will never know about that we executed at the highest level that I’ve seen an offense or defense execute at,” first-year coach Scottie Montgomery said during Monday’s press conference.

The win was almost necessary at this point in the season. ECU snapped a five-game losing streak, and gained important confidence in the process — confidence it will need with tough four-game stretch to end the season.

Montgomery said the confidence and energy the team gained from the win has been palpable in practice.

“(Sunday) was the best defensive practice I’ve seen, maybe since we’ve been here or any place I’ve been the day after a game,” he said. “It was as clean and energetic with guys talking and holding guys accountable. It made me feel good because I know what went on Saturday night, but Sunday, we were ready to go. We knew the defensive energy was coming from something. It was connected to the win.”

The Pirates travel to Tulsa, which has already earned its bowl eligibility. Also ahead is a trip to Temple, which has historically been a tough road game. They also have their showdown with Navy, which toppled Houston not too long ago, still looming.

That meeting with the Midshipmen was originally scheduled for Oct. 13, but Hurricane Matthew forced the game to be pushed back to Nov. 19.

It proved to be a blessing in disguise. The rest it got during the off week allowed ECU to practice more with its best offensive players against its best defensive players.

“We’re trying to add some time in practice so that we can manage our receivers,” Montgomery said. “If we can manage our receivers, we feel pretty good and comfortable about managing other people’s receivers. … The open date, once again, gives you the ability to go good-on-good. It gives your team the ability to rest a little bit so you can go good-on-good.”

The Pirates dodged having to battle a short week in preparing for one of the division’s top teams. They also got time to focus on some of the things that led them to a win over N.C. State.

With those challenges still ahead, ECU will hope that Saturday’s decimation of the Huskies will provide a blueprint for future success. Montgomery said the key is to remain consistent in the way he and the Pirates prepare for games, especially when it pays off like it did on Saturday.

“We’ll continue to try and get better with our plan, but the process is what it is,” he said. “Our process hasn’t changed that much. We’ve added a few things here and there, tweaked a few things, but it’s just a process. You’ve got to believe in the process.”