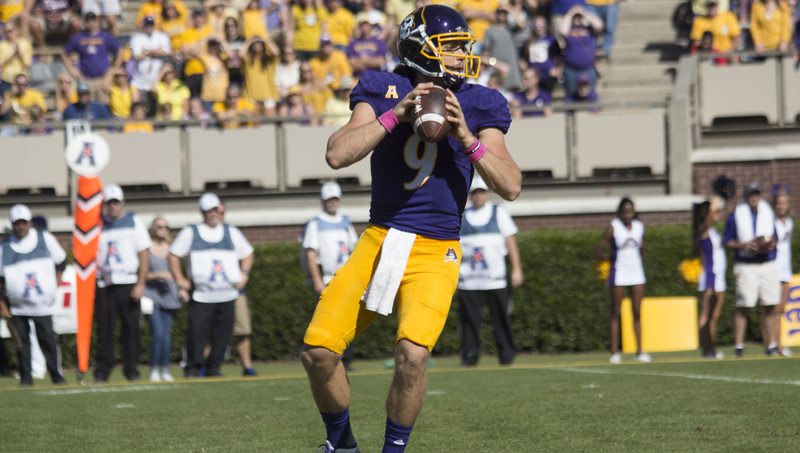 ECU quarterback Philip Nelson has plenty of time to scan for an open receiver against Connecticut. Nelson and the Pirates offense shredded the Huskies for 41 points, and may find themselves in a shootout in Tulsa this weekend. (Chris Rawls/WDN)

TULSA, Okla. — The East Carolina defense is riding high after allowing its fewest points since 2008 during a 41-3 drubbing of Connecticut.

This Saturday, however, the Pirate defense will have a different challenge as it faces a high-powered Tulsa offense, headed by senior quarterback Dane Evans. In the past two weeks, the Golden Hurricane offense has put up a combined 109 points following a 50-point output against Tulane and 59-point game against Memphis.

“(Evans) is pretty good,” defensive backs coach Rick Smith said. “We’ve been playing him for three or four years now. His first start was against us. When he was a young quarterback, they ran him a lot more than they run him now. But he’s still a very good runner with very good speed.”

Evans was the 2015 American Athletic Conference leader in passing yards per game. This season, he has led the Golden Hurricane to a 6-2 start, with the only losses coming against Ohio State and AAC power Houston.

In eight starts this year, Evans has thrown for 1,970 yards and 15 touchdowns with eight interceptions. He has netted negative yardage on the ground due to sacks and a depleted role in the running game.

The Golden Hurricane lets a pair of running backs share the load of carries. While D’Angelo Brewer has started all seven games he has played, he is second on the team with 803 yards and four touchdowns on the season. James Flanders compliments Brewer in the backfield, and has racked up 899 yards and 12 touchdowns — both good for second in the AAC.

Junior inside linebacker Jordan Williams took another start last week after being used in a backup role for most of this season. He led the way for ECU with nine tackles (five solo) and a sack. He said preparing for Tulsa has been no different from anything the team has done this year.

“Basically every team runs around the same offense,” Williams said. “We’re just focused on ourselves, focusing on our reads and keys and executing at 100 percent.”

Last year, in the Pirates second to last win of the season, Evans threw for 288 yards with a touchdown and a pick in Tulsa’s 31-17 loss in Dowdy-Ficklen Stadium. This time around, he’s looking for more. With dynamic and talented receivers like Keevan Lucas (53 catches for 754 yards), Josh Atkinson (44 catches for 591 yards) and Justin Hobbs (33 catches for 446 yards), the opportunity is there for the senior gunslinger.

“There’s some really good receivers and they’ve got a great scheme,” said Bobby Fulp, who switched from safety to cornerback last week as the secondary deals with injury problems. “It looks like they’re pretty fast, so we’ve just got to cover and do our jobs.”

Smith said sophomore cornerback Corey Seargent will be back this week. Though he will not start, he will be available off the bench, and will likely see some time on the field.

Defensively for Tulsa, it has been a struggle. The offense has masked some lingering issues. The defense has allowed 40 points three times this season: against Ohio State, Fresno State and Southern Methodist.

In what may turn into a shootout, Philip Nelson, Zay Jones and the rest of the Pirate offense will have to turn in a strong performance to keep up with the high-powered Tulsa offense. Saturday’s game will kick off at 8 p.m. at H.A. Chapman Stadium.