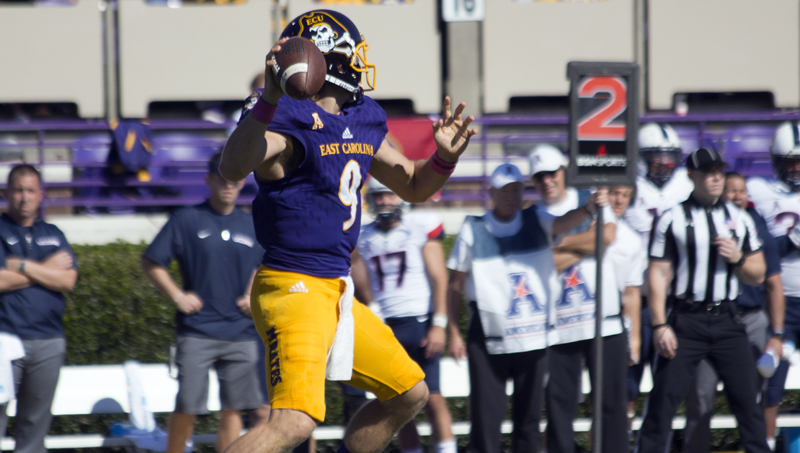 Philip Nelson cocks back for a pass during ECU’s homecoming game against UConn. Nelson has thrown eight interceptions in 10 games this year, and fumbles have been troublesome, too. (Chris Rawls/WDN)

GREENVILLE — East Carolina has played 10 games this season. It’s only won three of those — and just one in American Athletic Conference competition — because of a number of problems.

No issue has plagued the Pirates more consistently than ball security. They’ve turned the ball over 22 times in 10 games this season. Saturday’s blowout loss to Southern Methodist was the latest, and one of the worst games ECU has played from that standpoint.

ECU fumbled the ball away twice. Philip Nelson threw a pair of interceptions, and backup Gardner Minshew added one of his own. Mustang defensive back Horace Richardson returned two of those picks for touchdowns — the first being a 70-yard pick six on a simple screen pass, and the other being an 80-yard return.

“Turnovers have been the biggest contributor to where we are in the season,” Montgomery said as he opened his weekly press conference. “We have tried to address it and we’ve worked in several ways to fix the problems. I thought, early in the game, it was back-and-forth.”

Montgomery has identified some of the reasons behind the interceptions. Saturday was the fourth time this season that the Pirate signal callers threw multiple interceptions.

Now it’s a matter of fixing it.

“The way that you work on turnovers comes down to just taking care of the football and not having tipped balls and all of the things that have plagued us this year,” Montgomery said. “We had some mental errors in that game that directly impacted those turnovers. Those are definitely things we are going to have to clean up if we’re going to move forward with everything that we’re trying to get done.”

It’s something that Montgomery and the coaching staff has been trying to address for some time now. Red-zone ball security cost ECU its Sept. 17 game at South Carolina. With the exception of a strong showing two weeks ago against Connecticut, the turnovers issue hasn’t gotten much better.

That leaves Montgomery and company racking their brains for an answer — any answer. The first-year head coach says they’re going to turn to research. They want to find other programs that have gone through similar struggles.

“You can guess this and try to fix that, but what I’m trying to do is find the programs that have had it, reversed it, and what they did,” he said. “I’ll be on the phone and doing as much research as I can. Knowing where the turnovers are coming from is going to be critical and whom they’re coming from.”

The problem is that a lot of those interceptions are coming in odd areas.

“The majority of them have happened outside the hash, which is very unusual,” Montgomery explained. “When you have them like the two at South Carolina or the two this week (against SMU), those are unusual interceptions. We have a lot of research to do.”

Saturday’s loss puts bowl eligibility out of reach, but that doesn’t mean there’s nothing left to accomplish. The problem has been identified, and figuring out exactly how to correct all the turnovers could pay dividends as soon as next season.