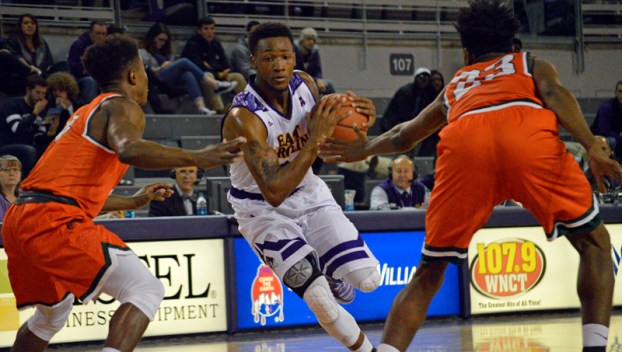 The home side used a near-perfect showing in the first half to cruise to its fourth win in five tries. ECU went 18-of-36 (50 percent) from the field and held the visiting Rattlers to 8-of-27 shooting in the first 20 minutes, and didn’t concede a 3-pointer in the game.

“The first half, we were outstanding again defensively,” ECU coach Jeff Lebo said. “We played really well offensively, too, and got out to a big lead. I thought we moved the ball well. We defended, for 20 minutes, well. Everything was difficult for them.

“Caleb, Kentrell and B.J., I thought, were all really solid. They didn’t turn the ball over. They took good care of the ball.”

After building a 46-21 lead in the first half, the Pirates let off the gas in the second. Florida A&M, led by Desmond Williams’ 19 points, nearly doubled its scoring output with 41 points in the latter half.

ECU’s first-half effort was too much to overcome, though. A layup by Trey-Cary Warren brought the Rattlers within 16 with 6:15 to play, but that was as close as they’d get in the second.

“We kind of relaxed a little bit and we didn’t keep the pressure on,” Barkley said.

The Pirates spread the ball around to put up 17 points through less than seven minutes of action. Seven different players scored for ECU, including freshman point guard Jeremy Sheppard, whose first career basket — a 3-pointer from the corner — gave ECU a 17-4 lead with 13:08 left in the first half.

Sheppard only played 10 minutes, but showed off his ability to quarterback the offense. He had six assists and only turned the ball over once in that span. 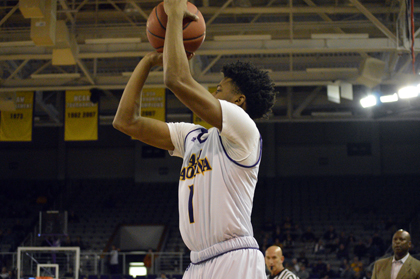 Jeremy Sheppard hoists up a shot from the corner. The 3-pointer dropped, marking the freshman point guard’s first career basket.

The offensive onslaught continued from there. White’s 196th career trey started off a late 15-0 run by the Pirates, and his 197th and 198th punctuated it. The Rattlers added a pair of free throws and a jumper, but ECU took a 20-point lead into halftime.

Florida A&M had a few spurts in the second half. Warren scored seven unanswered points to cut his team’s deficit to 56-39. ECU responded with eight in a row of its own — two Clarence Williams free throws sandwiched between triples by White and Barkley.

ECU moves on to play Mercer on Friday in the next round of the Savannah Invitational. That game will be played in Savannah, Ga. It will be the first meeting between the two since 1978.

GREENVILLE — It took under 20 minutes for Zay Jones’ banner to come down over the Murphy Center Saturday, commemorating... read more