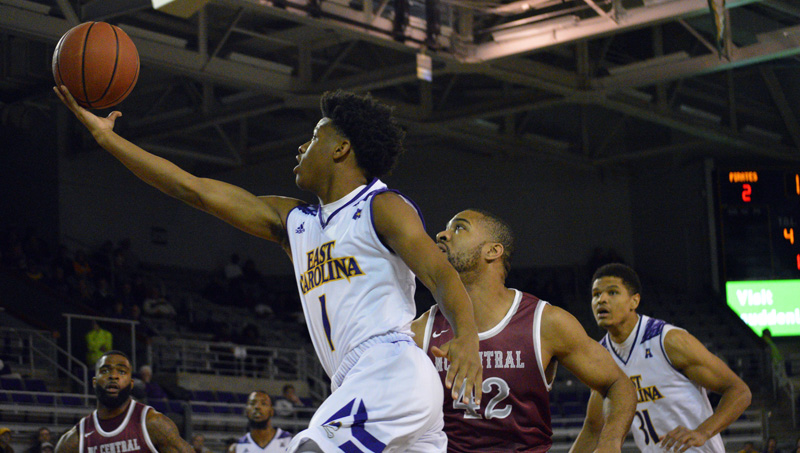 Freshman guard Jeremy Sheppard gracefully rolls a layup off the tips of his fingers and into the basket. Sheppard has proven in back-to-back games that he’s capable of running the ECU offense.

GREENVILLE — With a massive game at Virginia looming, East Carolina welcomed a scrappy North Carolina Central team to town on Saturday evening. The Pirates turned the ball over 16 times, but used their size advantage and strong defense to top the Eagles, 69-56.

ECU has now won three in a row and has seven wins on the season. There’s some momentum to take to Charlottesville, Virginia as the Pirates gear up for their biggest test of the season on Tuesday.

After only scoring four points against Hampton in his last time out, Caleb White started hot. He made four of his first five attempts from the field, including a pair of 3-pointers, to help the Pirates take a 19-9 lead less than nine minutes into the game.

The Eagles stayed in the game, but it never felt like ECU lost a hold of the game.

“At no point in the game did I feel like they were in control,” White said. “We had them on their heels the whole time. For the most part, I we executed our stuff. We defended really well.”

White finished with a game-high 20 points. B.J. Tyson, who came into the game under the weather, struggled to run the Pirate offense. The junior guard has been asked to play the point some this season. He stumbled with the new task as he turned the ball over four times. He finished with eight points and three assists.

Freshman Jeremy Sheppard stepped up in the meantime. The youngster is ECU’s only true point guard, but is hitting his stride after missing the first three games of the season. He poured in 13 points, dished out eight assists and even had five defensive rebounds.

“He’s got a long way to go, but he’s getting better,” Lebo said. “He’s got to be more vocal. He relies on me a lot out there to make every call. That’s typical for a freshman. As he gets older and he gets more confident, I think he’ll be able to takeover that role.”

Sheppard and White — ECU’s lone scorers in double digits — are two of three Virginia natives on the team. Andre Washington is also looking forward to returning to his homeland on Tuesday.

That said, ECU isn’t taking a different approach to preparing for the Cavaliers.

“I don’t want to psyche anybody out,” White said about not talking to younger players about big road games. “Anybody can go down on any given night. Just go out, execute, play your game and you’ll be fine.”

Tipoff between ECU and Virginia is scheduled for 7 p.m. on Tuesday.