Copper discusses what he sees in Jones 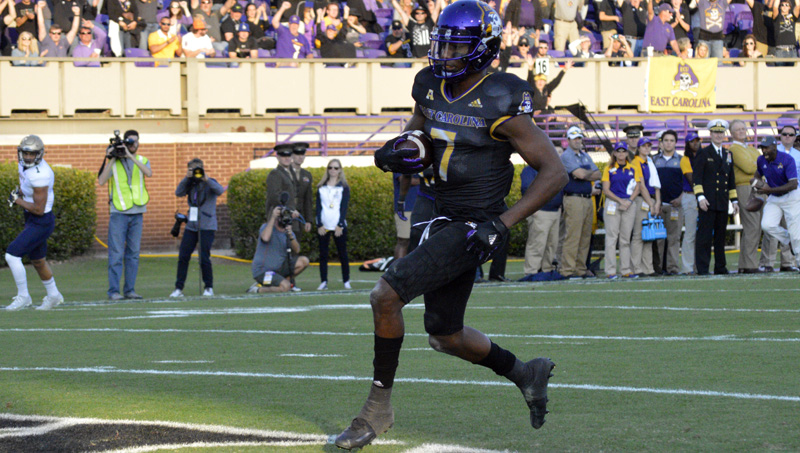 Zay Jones hauls in an early touchdown pass — one of his eight as a senior — against Navy. That game marked Jones’ final contest in Dowdy-Ficklen Stadium as a Pirate.

Zay Jones wrapped up his East Carolina football career at Temple on Nov. 26. Over the course of four incredible years, Jones caught 399 passes — the best in NCAA Football Bowl Subdivision history — for 4,279 yards and 23 touchdowns.

He had 158 receptions for 1,746 yards and eight touchdowns in his senior season, putting him on the radar for many National Football League franchises.

It also earned Jones the distinction of finalist for the Biletnikoff Award, which went to Dede Westbrook on Thursday night.

“He’s still done a lot for Pirate Nation,” said Terrance Copper, another on the long list of great ECU receivers. “He’s done a lot for the game of football when it comes to East Carolina football.”

Copper is one of the greatest receivers the area has seen. The Washington graduate grabbed 159 passes for 2,826 yards and 27 touchdowns during his Pam Pack career. He went on to play for East Carolina. As a Pirate, Copper had 139 catches for 1,683 yards and three touchdowns.

The Pam Pack and Pirate great went on to become a well-traveled NFL receiver. He signed with the Dallas Cowboys as an undrafted free agent. Copper also played for the New Orleans Saints, Baltimore Ravens and Kansas City Chiefs during his career, which lasted from 2004 to 2012.

Here’s what Copper had to say about Jones, who he deems the best receiver to wear the Purple and Gold. 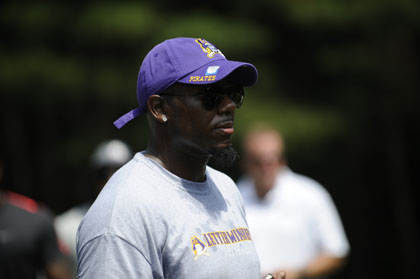 What he thought the first time he saw Zay Jones play:

“The first time I saw Zay play was, I want to say, two years ago (in his sophomore season). He’s a competitor. That’s the biggest thing that stuck out to me. He will out compete you. You don’t find that everywhere. You can’t coach that. You can coach a kid on how to run the routes, you can coach him on how to catch the ball, but you cannot coach someone on how to compete.”

How that ability to compete translates to the NFL level:

“That’s what he does. That’s something you can’t coach. It’s just him.”

What Jones’ ceiling is:

“It’s very high because he’s a big receiver. He’s not a short guy. He’s not 5-foot-11 or 5-foot-10. He’s got good height and good size to him. He’s just beginning. Once he gets in the league, he’s going to learn so much more than he knows now.

“He has a great coaching staff and a great receiving coach at East Carolina. Once you get to the NFL, you learn a lot more. There’s no telling once he adjusts to the game speed in the NFL.”

Where Jones ranks among some of ECU’s greatest receivers:

“If I had to rank him, I’d have to put him at No. 1. Not just because of the season he had this year, but … he’s a competitor. That’s one thing that keeps standing out to me. He’s a competitor. He competes. He catches the ball. He doesn’t drop the ball. He runs the routes, and on top of that, he’s a good person. He’s a better person than he is a player. That’s a lot because everybody knows the type of player he is.”

What those character traits mean at the professional level:

“It means a lot, especially to an organization. When you get to the league, you’re representing that organization. … When you go out in public, they want someone out there that’s going to represent them well. He’s definitely going to be that guy.

What he could have done as a Pirate with Jones on the field:

“We probably would have won more games! We had two or three years where we really stunk it up.”