Williams granted another year of eligibility 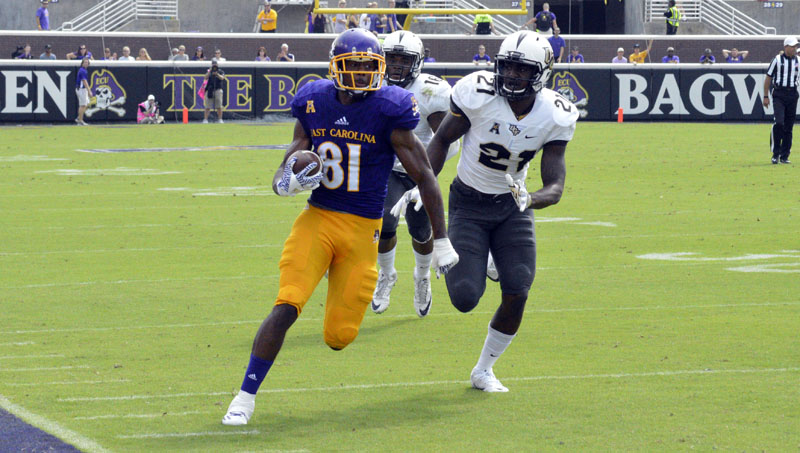 Jimmy Williams bursts down the sideline after making a catch against Central Florida this season.

GREENVILLE — Jimmy Williams will get another year of eligibility at East Carolina, according to a release from ECU athletics on Tuesday. The American Athletic Conference awarded Williams, a former quarterback at Washington and current Pirate wide receiver, a medical hardship waiver.

Williams played in just two games against North Carolina and Middle Tennessee during his true-freshman campaign in 2013 before he suffered a season-ending injury to his foot. Thanks to the waiver, those two appearances don’t exhaust a year of eligibility.

“He had a lot of injuries when I went back to research him,” ECU coach Scottie Montgomery said during the season of his second-best receiver, only behind Zay Jones. “… This year, without Trevon (Brown) or Davon (Grayson) playing, it put him in more of the spotlight. It going to be interesting next year when you get Davon back, you get Jimmy back, you get Trevon back. The only person you lose from the entire room is Zay.”

That means some much-needed consistency for the Pirates as they begin to cope with the graduation of the most prolific pass catcher in NCAA Football Bowl Subdivision history.

Williams finished the 2016 campaign with 45 catches for 818 yards and eight touchdowns. He had an explosive, breakout performance against Virginia Tech when he hauled in touchdown catches of 70 and 75 yards.

“He makes play on all the targeted balls that come to him. … We used to call it ‘drop, step, go’ when you catch it and quickly go vertical. We’ve changed that to ‘The Mechanic.’ That’s his nickname,” Montgomery said. “He does it so well. Jumping into that role (with Grayson and Brown out), I don’t know if anyone can argue anyone is playing better than him with the targets he gets.”

Williams added, “I felt like the more I got involved in the offense, the more I could do. All the plays I’ve made, everything I’ve done and contributed, it’s something I saw myself doing before the season started.”

Overcoming injury and being able to evolve into such a vital playmaker for ECU’s offense has been quite rewarding for Williams.

“Looking back on my career, I just look and see I was hurt on this day and that day with this injury and that injury,” Williams said after a midseason practice. “I feel like I can go out and play, and play smoother. I just feel more uplifted.”

Having a top-tier receiver like Jones lined up alongside Williams helped him get open. It took the defense’s concentration off of him at times, but he also did a lot of it himself. Players and coaches alike revere Williams as one of the best route runners on the team.

It’s a craft that he’s been honing since his days in a Pam Pack uniform.

“Jimmy is a great kid and we were fortunate to have him,” Washington athletic director and defensive coordinator Jon Blank said. “… I do think he’s got some of the best hips that I’ve ever seen. He used to drive me crazy when we’d do one-versus-one. Even though we were excellent on defense, we couldn’t stop him.”

Moreover, Williams feels that his role as quarterback at the high school level helps him develop a synergy with the person throwing him the ball.

“Sometimes I feel like I feel what he’s feeling,” Williams said. “They’ll come to me and say, ‘You should have done this,’ and yeah, that makes perfect sense. You can actually put yourself in his shoes and feel what he feels. It helps out a lot with the clarity of the things he’s seeing and the things I’m seeing.”

Blank added, “I think playing the quarterback position helped him understand some coverages and some of the hot reads that go with defenses and what they do these days. I think it’s helped him get open. He did play a little bit in the secondary, as well, so I think he has a good understanding of what the defense is trying to do against him.”

The preparation for his final season begins now. Williams spent a lot of time in this past offseason getting ready for this past season. He’ll surely be committed going into his final campaign in 2017.

“We’re building a bond. Being around each other, going out together, all of that contributes on the field,” Williams said. “You look to each other and say, ‘Hey, I’ve got you next time if you mess up.’ When you’re clicking, you’re clicking, and it carries over to the rest of the team.”

One comment of Blank’s has always stuck with Williams. He remembers his former coach being quoted in the Washington Daily News as saying, “he always wants to be ‘that guy.’”

“That’s my thing. I want to go out there and be the best player on the field every time I touch it,” Williams said.

Well, he’ll have one more year to prove he’s the best player on the field.