Pirates attempt to bounce back against high-powered UNCW 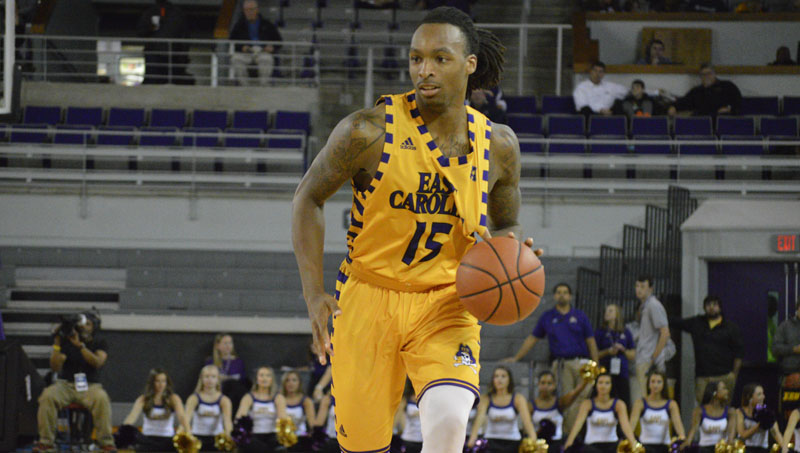 Kentrell Barkley quickly moves the ball up the court. Barkley and the Pirates will clash with a speedy UNC-Wilmington team on Tuesday.

WILMINGTON — East Carolina will travel to UNC-Wilmington for a non-conference road tilt on Tuesday. The Pirates have a tough task ahead of them as they attempt to bounce back from their most dismal offensive performance since the shot clock was introduced.

After a nine-day break between games, ECU shot just 23.4 percent from the field. Charleston stymied the Pirates’ offense as starters B.J. Tyson, Kentrell Barkley and Clarence Williams were a combined 0-of-16.

They’ll have a chance to recover from their poor shooting last time out against a UNCW team that is allowing opponents to shoot 48.2 percent from the floor.

They’ll need to do just that if they hope to keep up. The Seahawks have scored over 80 points in their last six games.

“They’re very quick, very athletic, and turn you over,” ECU coach Jeff Lebo told Josh Graham of 94.3 The Game. “They can score in multiple spots. They’re one of the leading field-goal percent shooting teams in the country. On their wood, it’ll be a tough test for us.”

UNCW has performed well at home this season. The Seahawks are 10-1 going into the matchup with the Pirates. Six of those wins have come at home. They also scooted by St. Bonaventure for an early hallmark road win. Thanks to that, UNCW is ranked 14th in the nation in terms of Rating Percent Index.

That very same road victory against a top-notch squad is something that has eluded the Pirates.

“We had a tough game on the road at Virginia,” Lebo said. “It would be a big win on the road for us to get one, and against a really good team. They’re high in the RPI. They’re playing with a tremendous amount of confidence right now. They’re a small team that plays very quick. This’ll be a tough test for us.”

ECU’s advantage lies in that size differential. The Pirates have three big men that all stand taller than 6-foot-9 Seahawk center Chuck Ogbodo. That should help them on the boards, but ECU also must be weary of UNCW’s speed in transition.

The likes of 7-foot-1 center Andre Washington will be a dominating presence in the paint for ECU. However, UNCW can elude him by beating him back on the fastbreak. That may force Lebo’s hand in running a smaller lineup that features Jeremy Sheppard manning the point.

ECU will continue to find an offensive formula that works before its Dec. 28 American Athletic Conference opener against South Florida. In the meantime, Lebo will lean on his team’s stellar defense.

“We’re one of the top defensive teams, when you look at the numbers, in the country,” he said. “We’re top 30 in a lot of categories. … Offensively, we’re a little bit more challenged than we’ve been in the past. We’re trying to find good shots. We’re trying to get the point guard position figured out.”

A win is going to be hard to come by in Wilmington, but getting in an offensive flow can go a long way for the Pirates.

Pirates can’t get shots to fall in loss to…