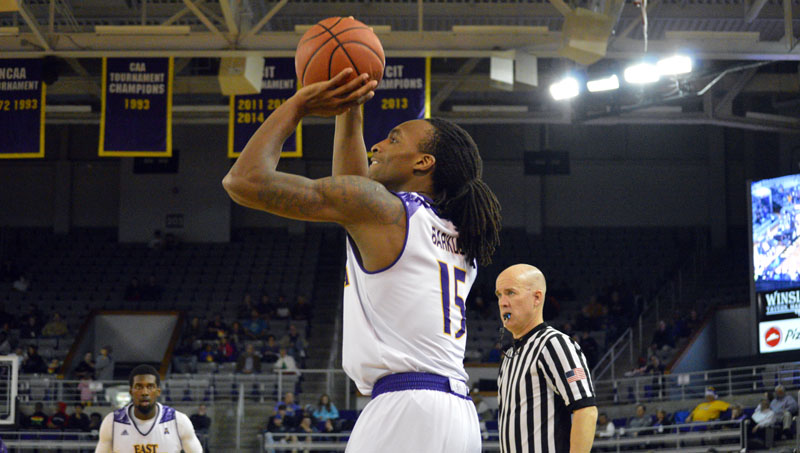 Kentrell Barkley hoists up a shot against Presbyterian. After struggling for a few games, Barkley had a double-double with 12 points and 10 rebounds.

GREENVILLE — East Carolina got back into the win column with a 76-56 win over Presbyterian Thursday evening in Minges Coliseum. The Pirates had their worst offensive showing since the shot clock was introduced last time they were home, but five players scored in double digits in the win.

A shakeup to the starting lineup saw freshman Jeremy Sheppard man the point at the beginning of the game. He’s shown his ability to facilitate the offense off the bench. It took the dismissal of senior forward Clarence Williams, which was announced before the game. Williams had started all 12 games prior to Thursday, so it opened a starting slot for Sheppard.

“I just listened to my players and teammates,” Sheppard said of his preparation to start. He found out at practice the day before. “They keep telling me to be myself, run the show, and make sure everything runs smoothly.”

ECU coach Jeff Lebo added, “Shepp, I thought, his ability to slither and make the right play where the ball was supposed to go. He makes other guys on the court better. That’s what you need in your point guard. He makes them better. He knows where the ball is supposed to. When he’s on the floor, he makes us better.”

Darius Moore drew first blood with a 3-pointer, but it was the only lead the Blue Hose would get. Barkley tied the game at 3-3 with a free throw, and White’s first of three treys gave ECU a lead it would never relinquish.

It sparked a 14-2 run by the Pirates that Michel Nzege punctuated with a layup, giving ECU a 17-5 lead with 11:20 left in the first half. Four different Presbyterian players scored as the visitors over the next four minutes to make it a one-possession game, but Elijah Hughes chipped in four points in the final 1:06 to help the home side take a 33-25 lead into halftime.

White opened the second half with a 3-pointer. The Blue Hose was able to heat up a bit from long range, too, but a thunderous alley-oop connection between Sheppard and Tyson blew the game open. The highlight-reel play gave ECU a 46-31 lead with just north of 16 minutes left in the game. 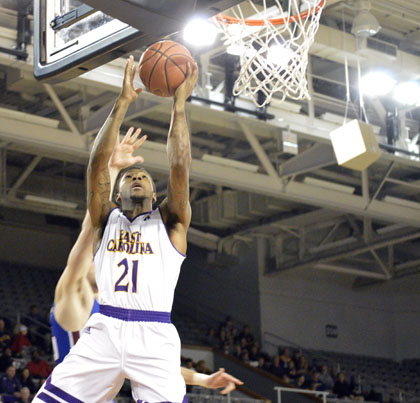 B.J. Tyson drives to the hoop for a layup. Tyson had 12 points and some explosive plays in ECU’s win on Thursday.

“He got out in transition a little bit. We had a nice lob for him against the zone,” Lebo said. “… I think he’s more comfortable there.”

After that, Presbyterian never got closer than 13. Tyson, returning to his more natural role as a shooting guard, threw down another dunk in transition.

ECU will be back in action at home on Wednesday for its American Athletic Conference opener against South Florida.