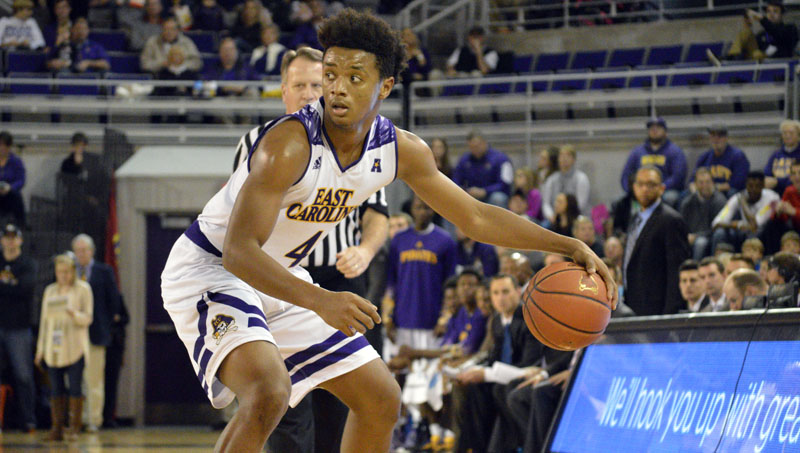 Elijah Hughes dribbles around the arc during ECU’s conference-opening win against South Florida. He led the team with 19 points, including 10 in a row in the first half.

GREENVILLE — East Carolina didn’t make a field goal in the final 9:08 of Wednesday’s American Athletic Conference opener against South Florida, but was able to use a fast start to win, 60-49.

The victory marked the first time the Pirates have won their first league contest since beating Tulane in their Conference-USA opener in the 2008-09 season. Prior to Wednesday, they had never started 1-0 in conference play under seventh-year head coach Jeff Lebo.

“It feels better than losing,” Lebo chuckled. “You’ve got a home game here. We’ve played good at home this year. We’re happy. It’s hard to get a league win. They’re just hard to get, especially when you’re just trying to claw to get to the middle and get to the top. They’re not easy to get, so we’ll take it.”

USF turned the ball over 15 times in the first half. The Pirates scored 20 points off of those giveaways in the first 20 minutes. It started right away when B.J. Tyson came up with a steal and dished it to Caleb White for a layup.

“I thought the first half really carried us in this game. Our defense was terrific,” Lebo said. “… Elijah Hughes had his best game as a Pirate. He did what we know he can do.”

The hot start gave ECU a 23-4 lead just over 12 minutes in. Hughes, a freshman guard, scored 10 straight points off the bench during the run, which included a steal-turned-dunk and back-to-back 3-pointers.

“I was just kind of in a rhythm,” Hughes said. “I just melt my teammates would trust me to give me the ball.”

ECU cooled off in the second after shooting 48.3 percent in the first half, and 44.4 percent from long range. Only 3-of-18 shots dropped, and just 1-of-11 from behind the arc.

The Bulls improved in the second, but still made less than a third of their shots in the game. They only made three 3-pointers as they tried to rally from the early deficit.

After trailing by as many as 20 points in the first half, USF was able to get as close as eight in the second. A jumper by Geno Thorpe trimmed ECU’s lead to 40-32 with 11:05 remaining. He led the visitors with 18 points, but was the only one on his team to score more than five.

A trey by Huges was the only shot that would fall for the Pirates after that. Even though they missed 17 times during their numerous trips to the free-throw line, it was enough to keep their distance from the Bulls.

“We didn’t make foul shots coming down the stretch. (Washington) struggled from the line,” Lebo said. Washington went 3-of-11 on free throws. “… You make those and it’s a different ball game. They were fouling intentionally late in the game. … Hopefully we’ve got some of those misses out of our system.

Kentrell Barkley, whose eight rebounds tied center Andre Washington for the team high, finished 0-of-7 shooting. Hughes’ 19 points, and three other Pirates adding at least nine, was enough to compensate.