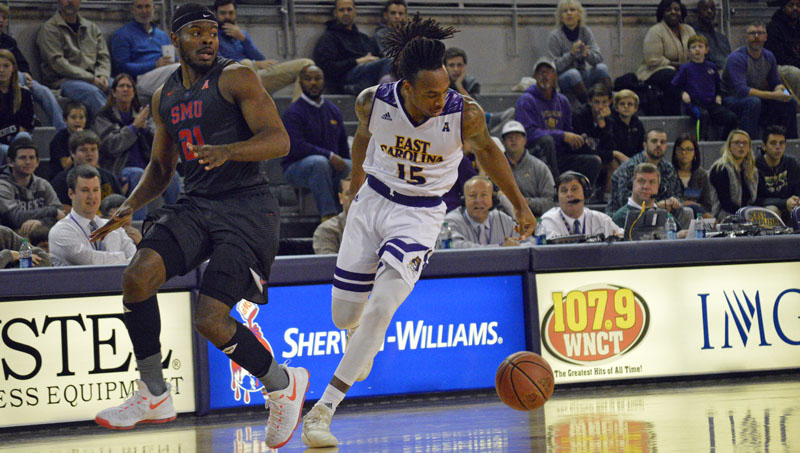 Kentrell Barkley nabbed a steal on one end, and goes behind the back to elude an SMU defender. Barkley bounced back with a 13-point showing in a big loss to the Mustangs.

GREENVILLE — What was a 10-point game at halftime devolved into Southern Methodist overpowering East Carolina, 75-44, in its final game of 2016.

East Carolina was fighting for its first 2-0 start in conference play since 1997. With that on the line, Kentrell Barkley experienced a return to form after going 0-of-7 against South Florida on Wednesday. His effort alone wasn’t enough, though, as Southern Methodist overwhelmed the cold-shooting Pirates.

“I can use my strength and speed to get to the basket and find open players,” he said. “It’s been kind of difficult shooting the 3. It felt good (to make one).”

ECU was within two possessions throughout most of the first half, but a 6-1 spurt by the Mustangs over the last 1:07 gave them a 34-24 lead heading into the intermission.

The wheels came off after that. The Pirates were largely cold outside of Barkley, who led the team with 13 points. Elijah Hughes had 10, making him the only other Pirate in double figures. The team shot just 35.3 percent from the field, again struggling from 3-point range and the free-throw line. Only 3-of-20 from behind the arc dropped, and just 5-of-15 free throws.

“Our shooting numbers were abysmal,” Lebo said. “… Defensively, they really packed it in on us. We were very, very hesitant offensively shooting the ball. It was contagious.”

Despite the addition of 7-footer Andre Washington at center, ECU was overwhelmed in the paint much like it has been in the past. SMU hauled in almost as many offensive rebounds (20) as ECU had in total (24), leading to 27 second-chance points for the Mustangs.

Freshman forward Leo Kontopoulos, at 6-foot-9, was the tallest player on SMU. It came down to team rebounding for the Mustangs, whose three 6-foot-6 guards were the smallest starters.

“We don’t have traditional big guys, and normally you count on those guys to do the bulk of your rebounding,” SMU coach Tim Jankovich said. “… We’re mostly about 6-foot-5, so we kind of have to be a bit out of the box and have everybody be aggressive. I’ve been shocked with our rebounding efforts all year long.”

Washington added, “We should honestly go through the film, go through the whole thing, and see what worked and what didn’t work. If we really, really do that, I think we can make some changes, but if we don’t do that, then nothing is going to change.”

ECU and SMU traded baskets early on. Barkley laid one in to tie the game, 8-8, for the fourth time. Ben Moore — who had a double-double with a game-high 18 points and 11 rebounds — knocked down a jumper to give the Mustangs a lead they’d never lose.

The players, however, felt the game slip away well before that.

“Toward the second half. I don’t think we played with a sense of urgency,” Barkley said. “I feel like we were going through the motions and we hadn’t executed the game plan.”

ECU hopes to get back on track when it hits the road Tuesday. The Pirates will travel to Central Florida for their first road game in conference this season.