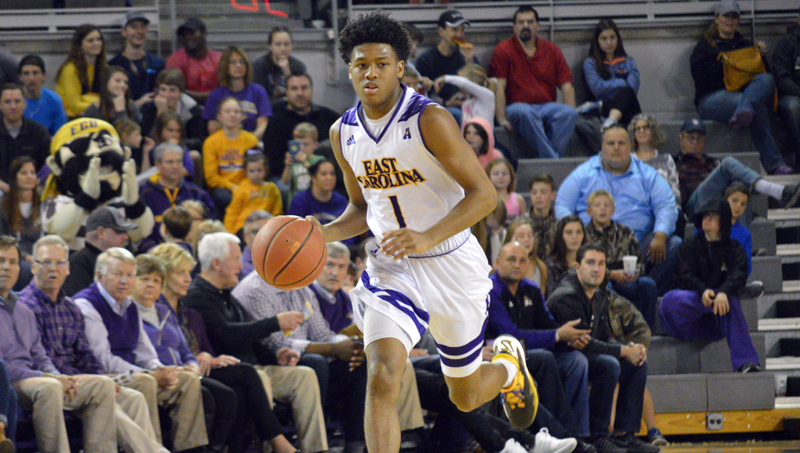 ECU freshman Jeremy Sheppard takes the ball down the court in the Pirates’ conference-opening win against South Florida. ECU hasn’t won since, and will need players like Sheppard to step up to bounce back against Cincinnati.

GREENVILLE — Fresh off a 66-64 victory over Southern Methodist, the No. 22 Cincinnati Bearcats bring an undefeated American Athletic Conference record and a seven-game winning streak into Minges Coliseum Sunday to face the slumping Pirates.

“We’re going to do what we always do,” head coach Jeff Lebo said. “We’re going to work, try to get them confidence and try to prepare our team like we always do. We’re always prepared. We just have to put the ball in the basket.”

Putting the ball in the basket, or a lack thereof, plagued the Pirates in Wednesday night’s loss to Houston, and the team now ranks 337th out of 351 teams with just 62.7 points per game.

“Our guys are working hard,” Lebo said. “They’re coming in extra, they’re shooting the ball at game speed. It’s in their head now, it’s easy to see that. You can go from the point where you think everything is going in to where you don’t think anything will. That’s where we’re at right now with our backcourt.”

Sunday’s matchup will feature two of the nation’s best statistical defenses, as ECU is holding opponents to just 62.6 points per game (No. 20 in the nation) while the Bearcats are allowing just 61.6 (No. 12).

Only three teams have scored more than 70 points against Cincinnati this season, Conversely, the Pirates have failed to reach that point landmark in all of their conference games so far this season.

His matchup inside with ECU’s 7-foot center Andre Washington could be the biggest factor in what should be a defensive battle. Conversely, Washington, the graduate senior, has a 7.7 defensive plus/minus while blocking a team-high 12.1 percent of eligible shots.

But what separates the nationally ranked Bearcats from the skidding Pirates has been their ability to shoot 3s in conference play. Cincinnati is hitting at a 43.5 percent clip from beyond the arc during conference play, leading all AAC teams. It’s also second in the league with 70.3 points per conference game.

With the team’s leading scorer potentially out for the game, Lebo and company will have to look elsewhere for production. Caleb White’s shooting slump has put the pressure on younger players like Elijah Hughes and Jeremy Sheppard, but the young duo is just 25-of-91 from long range.

Tip off is scheduled for 4 p.m. Sunday in Minges Coliseum. The game will mark the last contest coached by Lebo before he undergoes hip surgery on Monday.