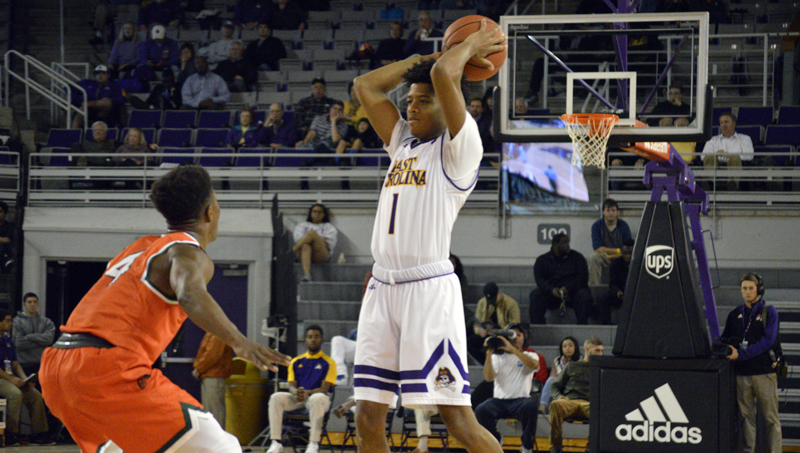 Jeremy Sheppard makes a pass in a game against Florida A&M earlier in the season. The freshman point guard is one of the pieces that needs to fall in place Wednesday at home against Tulsa.

GREENVILLE — There have been silver linings for East Carolina over the last few weeks. Whether it’s been holding Central Florida’s all-star big man pointless or the resurgence of Caleb White and Kentrell Barkley at Connecticut this past weekend, the Pirates have had positives to hang their hats on.

They just have to put them all together to pick up their first win of 2017. That’s exactly what ECU is aiming for Wednesday when it hosts Tulsa (10-7, 5-1 American Athletic Conference). The Golden Hurricane’s only league loss came to Houston. It owns victories over UConn, Temple and Memphis.

“It would do a lot for our confidence, and as a ball club, to get some momentum. In basketball, momentum is everything,” White said. “That would be a quality win over a quality opponent at home. Our hopes aren’t down, but it would get the ball rolling.”

White broke out of a cold spell at UConn on Sunday. He went 5-of-12 from the field and made a pair of 3-pointers. White hadn’t seen many of those fall for him. Unlike sharpshooter Akeem Richmond, who White played alongside when he arrived at ECU, he doesn’t shoot out of cold streaks.

“Not just for Caleb’s confidence. For everyone on the bench, coaches and players, it was important for all of us,” coach Michael Perry said. “That was great. He needs to be rewarded with making some shots. He really puts a lot of time into it. He’s a very conscientious kid, almost to a fault.

“Akeem Richmond, is they type of kid (who) had no conscious. If he missed a few, he knew he was going to make the next five. Well, Caleb is such a nice kid and such a conscientious kid. If he misses, his first thought is ‘Let someone else shoot.’”

Between White’s performance and Barkley’s team-best 18 points, it seems the Pirate shooters are returning to form. They’ll still be tasked with filling the void left by B.J. Tyson.

It will be tough to find offensive success against a malleable Golden Hurricane defense.

“They bring a different defensive package than a lot of the teams we see,” Perry said. “Generally, man-to-man is heavy in this league. There are some teams that will play zone, but they do a combination of defenses. They change their defenses more than any team we’ve seen this year.

“We’re going to see man-to-man defense, 3-2 zone, 2-3 zone, 3-1 zone. … What we always try to get our kids be mindful of when they’re playing against teams that change defenses is just play basketball. Be basketball players.”

It’s not impossible, though. Tulsa is allowing opponents to fire at just under 42 percent from the field. The Golden Hurricane is averaging 15.9 turnovers per game. If ECU can take advantage of any ball-security issues, it may be able to turn its generally strong defense into easy baskets.

“Coach (Jeff) Lebo has always said that it’s tough to defend for long periods of time if your offense isn’t clicking,” Perry said. “We’ve done a great job considering where we are offensively. Now we need to get both of them on the same page on the same night.”

Offensively, 6-foot-7 forward Junior Etou leads Tulsa. ECU’s forward brigade, quarterbacked by the 7-foot Andre Washington, will be tasked with keeping him out of the paint. Guards Jaleel Wheeler and Pat Birt also average just north of 10 points per contest.

Tipoff is slated for 7 p.m. in Minges Coliseum.