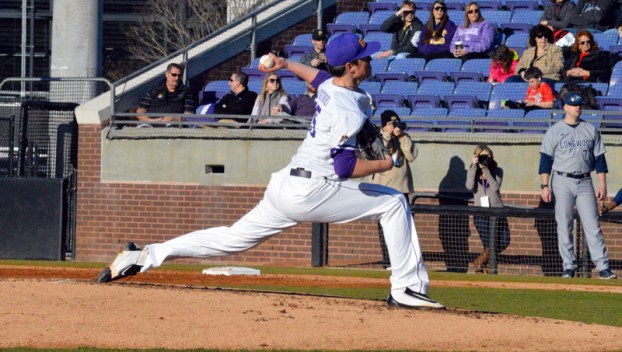 Evan Kruczynski toes the rubber during a Friday game last season. Kruczynski and the rest of ECU’s senior class has done a lot to build the program, and expect even bigger things this year.

GREENVILLE — Entering his third season at the helm of the East Carolina baseball team, it’s safe to say Cliff Godwin is settled in and ready to take his program to the next level.

Anchoring the chase for a title for this ECU team is a group of nine returning seniors on the roster, eight of which are entering at least their fourth year in the baseball program. Godwin gave high praise to the class that has helped set a new tone for Pirate baseball over the last four years.

“For the senior who have been here for four, and for Travis (Watkins) five years, I think (this season) is a huge deal,” Godwin said during the team’s media day Monday. “I mean you’re talking about a group that persevered through a coaching change and didn’t know what to expect from me and our new staff.”

With that coaching change, the aura surrounding the program completely changed. ECU pitching coach, who served the same role under former skipper Billy Godwin, Dan Roszel credited it to “attention to detail,” and said it was just the small things that helped the program turn a new page.

Four-year starting second baseman Charlie Yorgen said it was like “taking Spanish versus English.” For Watkins, who sat out his sophomore season with an injury and earned a medical redshirt, he has seen a larger scope of change than most players in the program, coming from a 31-26 record in his freshman season in 2013.

“I’ve said it before to my friends before, it feels like I transferred into a new program,” Watkins said. “East Carolina was always a great baseball school and it was a winning program and everything, but when coach (Cliff) Godwin came in here, the whole atmosphere changed. It was a positive change and everyone bought in, which is kind of hard at first to buy into a coaching change, but I think the guys did an outstanding job.”

The new spark of life Cliff Godwin brought into the program has given ECU early success in his first two seasons at the helm. In 2015, it was an American Athletic Conference championship, and last year he had his team one win from a trip to the College World Series in Omaha, Nebraska.

This year, Omaha is squarely on the mind of the team’s collective mind. Ace starting pitcher Evan Kruczynski even went as far to say that the expectation wasn’t just to make it to Omaha, but to win the National Championship.

“We’ve always had the culture and this year we have the talent,” Kruczynski said. “We’ve taken it a step forward every year since my sophomore year. With the conference championship (in 2015), the regional championship (last year), now it’s time to take a couple more steps forward this year, not just one, and win the whole thing.”

With four-year starters at four positions on the field, the senior class is ready to make an impact in its last go-around. The class is heavily credited with helping upgrade amenities around the stadium and with upgrades that will continue to come.

For Yorgen, the bond with his classmates is special and he hopes to make the most of his senior campaign.

“Spending all day, everyday with the same guys for four years, you pretty much have to become best friends or else you’re going to be miserable,” he said. “I’ve been with Bryce Harman for the last 10 years of my life, guys like Evan Kruczynski have been my roommate for four years, Travis Watkins, Eric Tyler, Kirk Morgan, all these guys. We’ve been best friends for four years, so it really helps us just being comfortable.”

The ECU baseball team will kick off its season on the road on Feb. 17 against Ole Miss before returning home the following weekend to face off with La Salle in a three-game set.

GREENVILLE — What started off as a relevantly uneventful game between East Carolina and Tulsa Wednesday turned into a nail-biting... read more