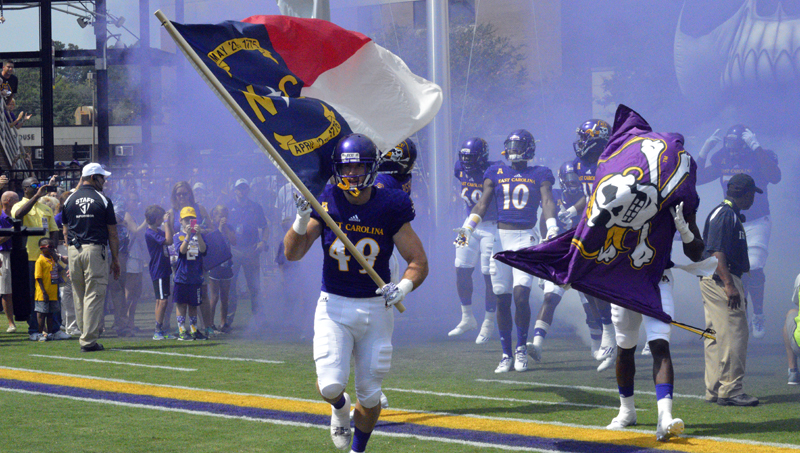 The Pirates’ fourth campaign in the AAC will officially begin when they welcome USF to Bagwell Field inside Dowdy-Ficklen Stadium on Sept. 30. In addition to ECU’s eight league matchups, previously-announced non-conference meetings with James Madison (Sept. 2), at West Virginia (Sept. 9), Virginia Tech (Sept. 16) and BYU (Oct. 21) complete the remainder of the docket.

For the first time in school history, Pirate fans will have an opportunity to watch seven regular season games at Dowdy-Ficklen Stadium. After playing five home games among its first seven overall contests, ECU will conversely close the year with three road visits in its last five outings.

“While the challenge is obviously significant, the opportunity it creates is something we fully embrace,” second-year East Carolina Head Coach Scottie Montgomery said. “We are thankful and blessed to be in a position to compete in front of Pirate Nation on at least seven occasions, which will play a critically supportive role as it always does. We’ll come out of the gate ready to go.”

East Carolina posted a 3-9 overall mark and stood tied for fourth in the American Athletic Conference’s East Division during Montgomery’s initial campaign in 2016. The Pirates have qualified for eight bowl appearances in the last 11 years and three in the last five seasons.

Season tickets are on sale now with packages starting as low as $175 each. The priority deadline to order is April 1. Purchases may be made via ECU’s Online Ticket Center or by calling the Athletics Ticket Office at (252) 737-4500.

… AND ONE NATIONAL CHAMPION

The Pirates’ season opener against James Madison will mark the third time in history that ECU will face the defending Football Championship Subdivision (formerly known as Division I-AA) champion. East Carolina fell 28-16 to Eastern Kentucky in 1980 after the Colonels captured the 1979 crown before downing Georgia Southern 35-33 in 1986 after the Eagles won it all a year earlier. The Dukes cruised to a 14-1 record in 2016, suffering their only setback at North Carolina (56-28) on Sept. 17.

IN THE FINAL POLLS

HOMECOMING AND OTHER DESIGNATIONS

COLORS OF THE DAY

East Carolina will “Paint It Gold” against the Hokies, “Paint It Black” versus the Owls and “Paint It Purple” when the Cougars visit Bagwell Field and Dowdy-Ficklen Stadium.

A LONG RUN VS. THE HOKIES & ACC

For the first time since 2009, West Virginia is back on East Carolina’s schedule. In fact, the last two times the Pirates and Mountaineers squared off (24-3 ECU win in 2008, 35-20 WVU triumph in 2009) resulted in a pair of conference championships for the Purple & Gold.

The 2017 campaign will mark the start of a new two-year rotation in the AAC’s out-of-division scheduling arrangement as the Pirates will battle Houston, Tulane and Memphis over the next pair of seasons after wrapping up a two-year commitment with contests against Navy, SMU and Tulsa. ECU has rolled to a collective 14-3 mark against the Cougars (3-2), Green Wave (5-1) and Tigers (6-0) in the last 10 years.

East Carolina’s four non-conference opponents were a combined 43-12 (.782) a year ago, while the Pirates’ eight American Conference foes posted a collective 55-47 (.539) record.

The American Conference will conduct its championship game on Dec. 2. The title clash, which pits the winners of the East and West Divisions on the home field of the highest-seeded team, will be broadcast on either ABC or ESPN.

The Pirates’ open date will be Sept. 23, which is Week 4 of the college football season. The bye will follow ECU’s first three non-conference contests and precede the AAC opener against USF.

WHAT ABOUT KICKOFF TIMES AND TELEVISION PICKS?

Kickoff times and television selections for the first three weeks of the season will be announced in June, while the remainder will be through the traditional 12-day/6-day process.