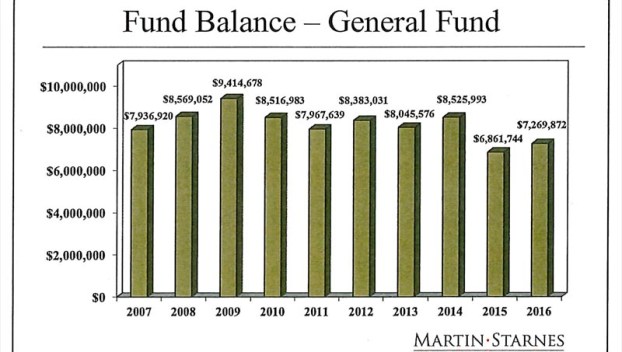 Washington’s financial books are in excellent condition, according to an audit report presented to the City Council during its meeting Monday.

Lucas Jackson, an audit senior accountant with Martin Starnes & Associates, presented the report, which gave the city an unmodified opinion — the highest recognition possible — on its accounting procedures. The audit found no significant material weaknesses or deficiencies in the city’s internal controls over its finances.

Unlike the audit report on the previous fiscal year, this one contains no notices of violations. The city acted immediately to address those minor violations, mostly regarding the lack of budgets for some minor funds.

“I made a point at our meeting on Saturday to state to the board that this was the second-lowest fund balance we’ve had in the 10-year period that’s shown there. If it weren’t for the transfers this year, the fund balance from this year and last year would have been, essentially, flat,” Mercer said. The councilman said he would like to see the fund balance recover during the next several budget years, if possible.

Jackson said the available $5,069,344 is “well in compliance” with the LGC’s recommendation. He also noted the city’s revenue sources produced less money in fiscal year 2015-2016 than they did in the previous fiscal year.

When Washington City Council members designated drainage as the No. 2 issue the city faces in the next three to... read more