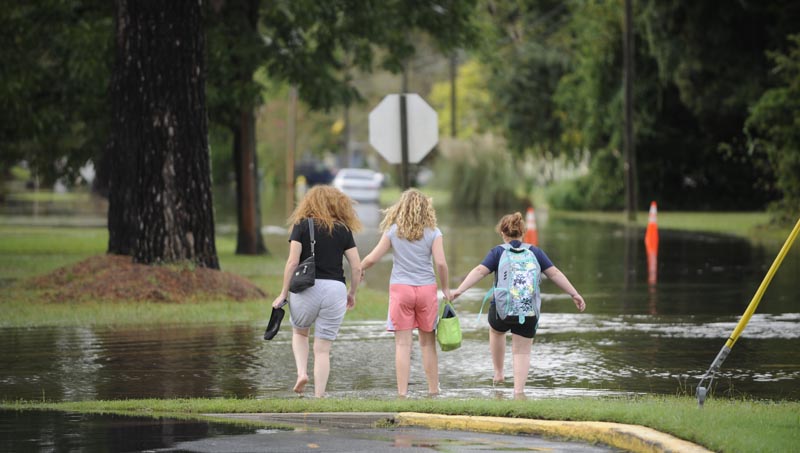 DRAINAGE ISSUES: Residents carefully make their way through high water in September 2016. Many low-lying areas experienced flooding because of an unusual amount of rain. A few weeks later, Hurricane Matthew brought more flooding to the area.

When Washington City Council members designated drainage as the No. 2 issue the city faces in the next three to five years, it came as no surprise.

In recent years, the city has made an effort to improve drainage throughout the city, especially the Jack’s Creek basin. City officials know there’s much work to do, but the challenge has been and continues to be finding the money to fix the problems. And two flood events late last year, one in September and the other the result of Hurricane Matthew in October, resulted in city residents taking their latest drainage-related concerns to the council on several occasions.

The city has been working on improving drainage in the Jack’s Creek basin in phases, starting at where the creek flows into the Pamlico River and working upstream. Phased project were done as the city found the money to pay for them. The city has replaced drainage pipes with larger ones, replaced a bridge over the creek and made other improvements. The city also made drainage improvements in two other basins: work at the intersection of U.S. Highway 17 Business and 15th Street improved drainage of the Airport Canal to Tranter’s Creek, and work on Northwood Road in Smallwood that improved drainage to Runyan Creek.

“It’s a matter of how much farther back upstream can we afford this year. We started here. We moved to here. How much can we finance this year? Regrettably, we’re putting $150,000 to $200,000 a year into a $10-million project. I made the statement one time that 50 years from now we’ll complete what we said we needed to do this year, and we’ll have a completely new set of problems,” Mercer said. “We need to go ahead and bite the bullet and decided how we’re going to finance it and do what we need to do.”

Mercer said city staff should provide the council a “complete package” concerning drainage issues, how to solve them and how to pay for it.

City Manager Bobby Roberson said homeowners in the East 12th Street area of the city and who have flood/drainage issues might be able to benefit from having their houses elevated under a Federal Emergency Management Agency hazard-mitigation program, which the city is pursuing. The city also is working with some city residents who might want to work with FEMA on its buyout program.

Under FEMA’s buyout program, homeowners whose houses have flooded in the aftermath of major storms or hurricanes should be seeking such buyouts. The buyout process is not a simple process, taking, on average, one to two years to complete. A buyout requires an agreement among a local government, the state and FEMA. Anyone seeking a buyout should know that many flooded properties do not qualify for buyouts, but properties that meet specific criteria may be eligible for buyouts.

Buyouts are voluntary occurrences. No one is required to sell his property. FEMA pays 75 percent of a buyout cost, with the remainder paid by the state and local governments.

Recently, the city conducted a meeting about the two programs with city residents.

As a result of flooding caused by Hurricane Matthew, John Pack, Beaufort County Emergency Management director, was authorized to apply for several FEMA hazard-mitigation grants to target several areas prone to flooding, particularly the apartment complexes on Heritage Drive south of the Washington-Warren Field airport. Residents in that area were evacuated after heavy rains in September 2016 and during and after Hurricane Matthew.

“Some have flooded nine times in 10 years,” Pack told the Beaufort County Board of Commissioners at its January meeting. “FEMA’s very interested in getting them out of there.”

Pack said stormwater hitting those buildings, spilling into neighboring streets and flooding beneath houses there had destroyed HVAC systems — seven claims had been filed by homeowners and honored by FEMA since the two flooding events in late 2016.

“(It’s) $2.1 million to remove 20 units out there. The deed to the land will go to the city, who will then be able to put a stormwater retention facility in, utilizing some of the property there that’s down from the airport plus where these units come out of to help reduce the stormwater flooding below that facility and to the adjoining streets,” Pack said last month.