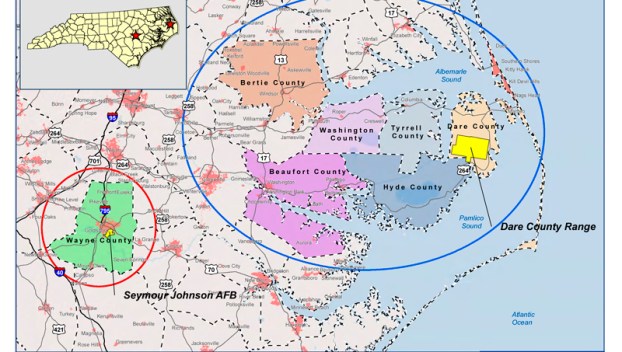 AFFECTED REGION: The two main study areas for the Seymour Johnson Air Force Base & Dare County Range Joint Land Use Study are circled in red and blue. Beaufort County and Washington have representatives involved with the plan.

The draft of the Seymour Johnson Air Force Base & Dare County Range Joint Land Use Study is available for public review and comment.

A JLUS is a planning process accomplished through the collaborative efforts of stakeholders in a defined study area to identify compatible land uses and growth management guidelines within, and adjacent to, an active military installation. These stakeholders include local community, state, and federal officials, residents, business owners, federal resource agencies and landholders, nongovernmental organizations and the military. The planning process is being coordinated by the N.C. Department of Commerce in partnership with seven counties — Beaufort, Bertie, Dare, Hyde, Tyrrell, Washington and Wayne — and the cities of Goldsboro and Washington.

“From the military’s perspective, they feel it to be important because it helps with land use. What they’re looking for is compatible land uses. Because of those existing flight patterns, what they’re trying to do is … make sure people understand where those routes are, and they would hope the counties participating would either do something to ensure that compatible uses were in place along those routes so, for instance, you don’t build large structures in those routes because that would interfere with their ability to do their operations,” said Beaufort County Manager Brian Alligood and a member of the JLUS technical advisory committee. “From my understanding of what the military is looking for, that’s why they put this plan forward.”

William Pitt, a member of the Washington City Council, serves on the JLUS policy committee, which is responsible for the overall direction of the JLUS, preparation and approval of the study design, policy recommendations and draft and final JLUS documents. “It’s bringing the federal government to the public, to allow the public to understand the operations that gone on at Seymour Johnson Air Force Base protect the entire country, not just Seymour Johnson. … With the JLUS organization the way it is set up, it allows local elected officials to have a voice and representation over the flight paths,” Pitt said about the purpose of the study.

An informational workshop about the JLUS was conducted in Washington in May 2016. Some Beaufort County commissioners have expressed concerns that the JLUS is a step toward making the county consent to some land-use restrictions with which they are not comfortable.

Mike Hrapla, vice president of the Matrix Design Group, the JLUS consultant, said the JLUS is not a regulatory document or an enforcement action. Hrapla presided over a public meeting on the JLUS. The meeting was conducted at the Washington Civic center Tuesday.

Aircraft from Seymour Johnson Air Force Base at Goldsboro travel over Beaufort County to the Dare County Range, where they practice dropping bombs and firing other weapons at targets. Other military aircraft may use the range for similar purposes.

“The goal of the Seymour Johnson AFB and DCR JLUS is to protect the viability of current and future military mission and operations, while simultaneously guiding community growth, sustaining the environmental and economic health of the region, and protecting public health, safety, and welfare,” reads the draft JLUS.

One reason to prepare a JLUS is “to aid in mitigating existing and future conflicts and enhancing communication and coordination among all affected stakeholders. This program aims to preserve the sustainability of local communities while protecting current and future research, development, acquisition, testing, and missions at Seymour Johnson AFB and DCR,” according to the draft.

Another of the plan’s goals is to establish and encourage a working relationship between the military installations — the Air Force base and bombing range — and the neighboring counties and municipalities so that any encroachment issues connected to existing and future military missions and growth in the neighboring communities are reduced or eliminated. Encroachment issues refer to conflicting uses of land, water, air and other resources that could individually, or cumulatively, affect the military’s ability to carry out its training missions.

A split City Council on Monday authorize the city manager to sign a pre-application for grant funds to improve the... read more