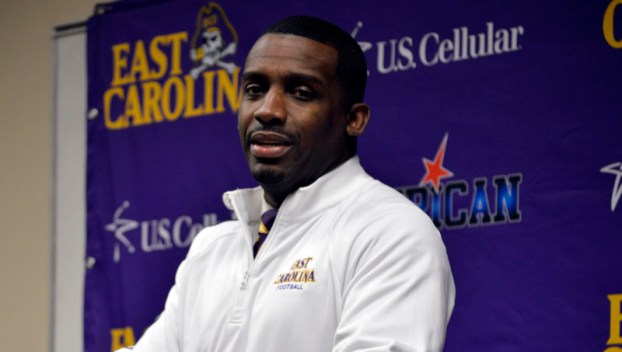 GREENVILLE — The pads are absent, but don’t let that take away from the fact that East Carolina football is back. Just like the objective of last year’s spring period was conditioning and discipline, second-year head coach Scottie Montgomery said execution is the focus of this spring.

To improve in that regard, Montgomery is conducting every practice with as much intensity as a game. The Pirates got the spring underway with a 100-minute session on Monday afternoon.

“This year, our focus in all three phases will be directly connected to execution,” Montgomery said. “I’m expecting our coaches to create situations through drill work that will improve our ability to execute the smallest of details.”

When it comes to execution, Montgomery and his staff are primarily focused on limiting turnovers. ECU fumbled the ball away 12 times and threw another dozen interceptions in a three-win season last year. Many of those interceptions came on balls tipped, but not caught by receivers.

“It was our eyes, our vision, or lack thereof, that caused us to have most of our fumbles and tipped balls,” Montgomery came to realize after watching tape from the season back in December.

There’s even lingo that Montgomery has created for this. One of the scenarios he described was a player perhaps catching the ball, not being aware of an extra defender coming in for the tackle, getting hit at an angle and putting the ball on the ground.

The second facet relates to protecting the quarterback. Montgomery said that strength and conditioning coach Jeff Connors was the standout of winter conditioning. He also praised the strides made by offensive and defensive lineman. Montgomery said throughout last season that the Pirates need to improve in the trenches. That was also an emphasis of the most recent recruiting class.

However, the quarterback has to be tasked with protecting himself, too.

“The No. 1 person that’s in charge of protecting the quarterback is the quarterback. We’re going to do a much better job this year of making sure we get the ball out of our hands, whether we get a big play or not,” Montgomery said. “… We did not create a big play. We usually created a big play for the other team.”

Montgomery said that Gardner Minshew, who started two games last season, goes into the spring as the starting quarterback.

Defensively, Montgomery said communication is going to be focal to improving execution. Since January, he said that the coaching staff has worked on simplifying how calls are made and communicated all the way from the backend defensive backs up to the linemen.

There are other things that ECU is already dialed in on. Tackling is one. Montgomery and his staff has its work cut out. There’s a lot to accomplish between now and the Purple-Gold Spring Game on April 22.

It’s Montgomery’s second time going through spring football at ECU. He has a routine, and his mission is outlined. Even so, the intensity level will make the spring anything but easy.

“It’s not going to be easy,” Montgomery said. “Each one of these practices will have the stress level of a game. That’s the atmosphere I want in the building.”

GREENVILLE — It was a long weekend for the now-No. 25 East Carolina baseball team, as it suffered a home... read more