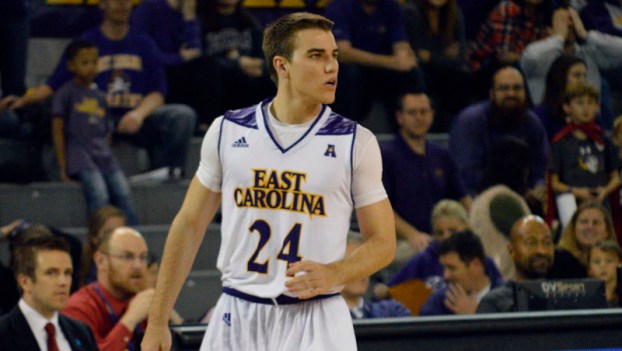 John Whitley gets in position after bringing the ball up the court and making a pass off to a teammate. Whitley only stepped on the court a handful of times this season, but the Washington native has big plans for himself.

Whitley proud to be a Pirate

GREENVILLE — Thirty-eight ticks left on the clock. It was Nov. 20, and East Carolina had a 73-50 lead over visiting non-conference foe Stetson. The outcome was all but decided, but those few seconds felt like a lifetime to Washington native John Whitley.

It was, after all, something that Whitley had waited for his entire lifetime. Growing up just half an hour away from Greenville and ECU, the former Pam Pack standout had always imagined what it would be like to take the court during a game in Minges Coliseum.

“I think everybody dreams of playing for their hometown,” Whitley said. “Ever since I picked up a ball when I was a little kid, I always wanted to play for ECU.”

There was nothing that could have prepared him for that moment. Whitley played in some big games during his time at Washington and his year at Moravian Prep. He played AAU basketball with Edrice “Bam” Adebayo, who just exited the NCAA tournament when North Carolina knocked off Kentucky.

All he could really do was soak it all in.

“Nothing. Air,” Whitley said, describing what was going through his mind the first time he checked into a game. “It was weird. It was really cool.”

Whitley established himself as a playmaking point guard while wearing the Pam Pack navy and white. As a junior, he was adept at finding scorers like Stevie Green, who averaged over 20 points a game as a senior in 2013-14. Whitley could score, too. He was able to turn his defense into offense, and had a good mind for high-quality shots.

He evolved his scoring touch as a senior in 2014-15. Whitley was relied on to create for others like he had been, but to also create opportunities for himself. He was able to do just that. His 16.1 points per game led the Pam Pack that season.

The breakout season gave Whitley an opportunity to play at Moravian Prep. The Hickory-based basketball program lets players take a year off between high school and college to work on their game, but also preserves their eligibility.

“This is definitely the best way, taking a year off from school while focusing on my game and getting stronger. Hopefully I can go a little bit further,” Whitley said of the decision in 2015. He had been offered to play basketball at the Division III level, but was aiming higher.

He did get further when the Division I program he grew up following invited him as a walk-on last summer. Now Whitley gets to work daily with Division I coaches and fellow Division I players.

“It’s definitely a lot different,” he said. “There weren’t a ton of college players that we played in high school. Coming here, there are 15 of them, which is a lot different. Coach (Jeff) Lebo is, obviously, really established in basketball. Learning from him is really cool.”

One of Whitley’s favorite parts about his first season with the program was traveling all across the country with the Pirates. He said that the heritage surrounding Virginia basketball made the trip to play the Cavaliers one of the most memorable.

As special as this season was for Whitley, he still has a lot left he wants to accomplish. The ultimate goal boils down to being on the court doing what he loves.

“I want to play. That’s my main goal. I’m going to work as hard as I can. That’s always been my thing,” he said.

After going three up, three down in the first inning, Washington scored runs in the next three frames en route... read more